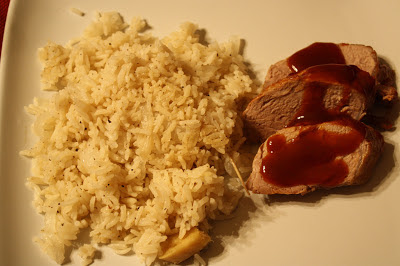 This is a recipe I got from Shauna James Ahern’s first book, Gluten-Free Girl. Looking at it on the shelf recently, I realized that it still had a bookmark sticking out, pointing to a recipe I never got around to making. So I decided to get to it, and I’m really glad I did. Despite the title, you don’t actually need a barbecue to make it (though I’m sure it would taste great if it were cooked on the grill rather than in the oven). The recipe makes a lot of sauce, but I made it with two pork tenderloins instead of one, to spread things out a bit more (one of those tenderloins is currently in the freezer). One big pork tenderloin, plus the quantities below, should give you 3-4 servings.

For the ketchup, I prefer the taste of Heinz to other brands, but I avoid HFCS, so I only buy Heinz Organic now. I thought the sauce was a little too vinegary, but the Engineer loved it just as is and fantasized about drinking it, so I’ll keep making it this way! I myself was particularly fond of the rice and might keep this recipe to serve it with other dishes, though I would consider putting the lemongrass and ginger in a cheesecloth bag just to make serving easier.

In a saucepan, bring the ketchup, rice wine vinegar, oyster sauce, garlic cloves and green onions to a boil over medium0high heat. Turn the heat down to medium and let the sauce simmer for 30 minutes, stirring occasionally. Strain the barbecue sauce and set it aside.

Meanwhile, put the rice, water, lemongrass, butter, ginger, white onions, salt and pepper into another saucepan and bring to a boil (this is where I’d consider tying the lemongrass and ginger in cheesecloth). Reduce to medium-low heat and cover tightly. Simmer for about 20 minutes or until all the water has been absorbed. Allow the rice to stand, off the burner, for 5 to 10 minutes, while you are preparing the pork (or, in my case, until the pork is ready).

Slice up the pork and lay over a small mound of aromatic rice. Pour the remaining barbecue sauce over the pork. 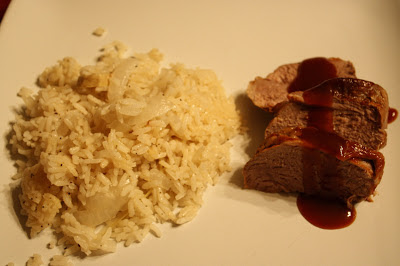 This sounds so good, will definitely be giving this ago..Thanks for sharing.