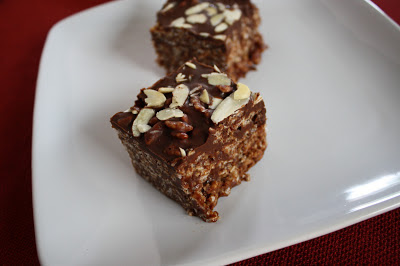 This recipe is from Food 52, and I found it via my friend Jen’s Pinterest. It came at an opportune time, because I had an open box of Rice Krispies from making this cookie recipe, and I’d been trying to use up leftovers in granola (like chocolate crunch granola and chai spice granola), but still had a lot. And man, were these treats good!

They happen to be vegan (which is great if you don’t eat marshmallows), use natural sweeteners, and have so much more flavor than plain Rice Krispies treats! The original recipe calls for ½ cup chopped chocolate on two occasions; I unilaterally decided that was 4 oz., although looking at another recipe more recently suggests that 3.5 oz. would be more accurate (hey, I was close). These bars were messy to eat, with chocolate melting on our fingers, but I think that would still have happened with 0.5 oz. less chocolate, and besides, you get sticky hands with marshmallow treats anyway. If you use 4 oz. as a guideline, at least you don’t have a little square of chocolate left over from your bar. I used peanut butter instead of almond butter, and the Engineer said that the treats tasted like Reese’s Peanut Butter Cup meets Rice Krispies squares. We both loved these!

Line an 8”-square pan with a sling of parchment paper. (I folded the corners and stapled them together for more stability, which seemed like I hacked together a solution, but it was really quite helpful.)

In a large saucepan, bring the maple and rice syrups to a rolling boil for 1 minute, stirring frequently with a heatproof spatula or wooden spoon (be careful not to let it boil over). Remove from the heat and stir in the nut butter, chocolate, coconut oil and salt until everything is smooth and the chocolate is melted. Fold in the rice cereal and pack the mixture firmly and evenly into the lined pan (damp fingers can help here). (At this point, you might want to refrigerate the bars.)

In a double boiler (I use a metal bowl set over a saucepan with water), melt the remaining chocolate and coconut oil together over very low heat, stirring constantly just until melted (be careful not to scorch the chocolate). Pour the chocolate mixture over the rice mixture, spreading it smooth. Sprinkle the nuts and flaky salt over the top.

Let the bars set at cool room temperature (about 2 hours) or in the refrigerator (about 1 hour) until firm. (I strongly recommend the refrigerator.) Lift the sling out of the pan, trim away the edges if you like, and cut into 16 squares.

These treats are best the day they are made. They will keep at room temperature for several days, though the cereal will soften slightly. I kept mine in the fridge, and they were just fine for a few days. 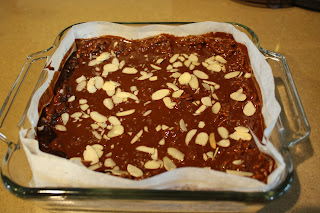 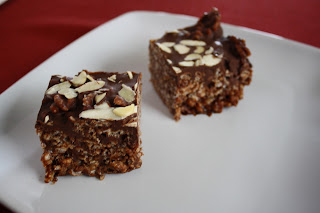