This recipe is super simple and calls for only a few ingredients, but it’s so delicious! I would say that the pine nuts are optional, although they don’t get lost in this salad. I realize that they’re expensive, but this isn’t one of those dishes where you feel like you might as well rip up a few dollar bills in teeny pieces and throw those on top of the dish! The Engineer described it as “a bright, pick-me-up salad”, “zippy”, and “a mood booster”. Next time I make it, I’ll probably throw in some fresh basil, too. I served it here with falafel. Enjoy the summer!

In a medium-sized pot, boil the corn until kernels are just soft, about three minutes. Place in a bath of cold water to stop the cooking. Once cool, slice the kernels off the cob and pour into your favorite serving bowl. 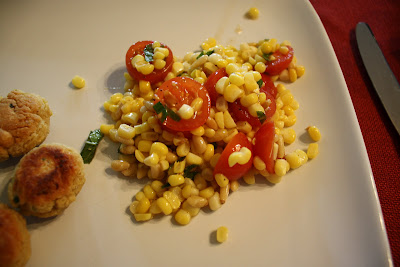 wow! the kids will love this one
-maman des zigotos