I made this recipe from Bon Appétit, tweaking a bit (ha!) to make it vegetarian and less dairy. Instead of regular breakfast links, I used some vegetarian sausage links by Morning Star. They were good and smelled like the real thing, but I must admit I was missing the taste of pork breakfast links (which I never have at home anyway, though). While I do think that either kind of sausage is good in this recipe, my preference would go to ethical pork sausage, if there is such a thing widely available. I liked the taste of the green onions in these griddle cakes, but we had them for dinner and subsequent lunches, not for breakfast; judging by the picture in Bon Appétit, they are omitted in the breakfast version. That being said, these griddle cakes were really good, and both the Engineer and I quite liked them. I served them with a side of carrot slaw.

The original recipe also calls for making orange-honey butter as an accompaniment. I did so, even though it contained too much lactose. I didn’t have enough honey, so I used half honey and half agave syrup, even though the latter is much thinner; I omitted the salt and pepper. While the mixture was good, and needed to offset the dryness of the griddle cakes, I honestly don’t think the butter was necessary. Next time, I’ll use maple syrup and orange zest, which I think will suit the purpose nicely. I’d also halve the recipe, because we had a lot left over after all griddle cakes were gone (and there were a lot of those). That’s what I’m writing down below.

Cook sausage in a 10" cast-iron skillet or other large heavy nonstick skillet over medium heat, breaking up into small pieces with the back of a spoon, until browned and cooked through, about 8 minutes. Using a slotted spoon, transfer sausage to a small bowl. Add corn to same skillet and cook over medium-high heat, stirring often, until browned, 5–6 minutes. Transfer corn to bowl with sausage and let cool. Wipe skillet clean and reserve.

Whisk cornmeal and next 7 ingredients in a medium bowl. Whisk buttermilk (or substitute) and eggs in a large bowl; add dry ingredients and whisk until just combined. Fold in sausage, corn, and scallions.

Heat 1 Tbsp of the oil in reserved skillet; working in batches and adding oil as needed between batches, add batter to pan by tablespoonfuls. Cook until cakes are crisp and golden brown, 2–3 minutes. Turn cakes over and cook until browned, 1–2 minutes longer. Transfer cakes to paper towels to drain. Serve warm drizzled with orange syrup. 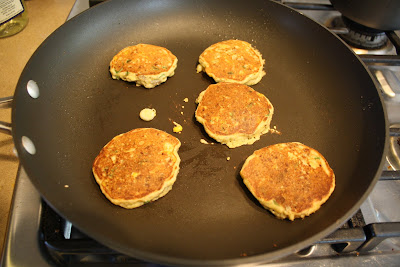 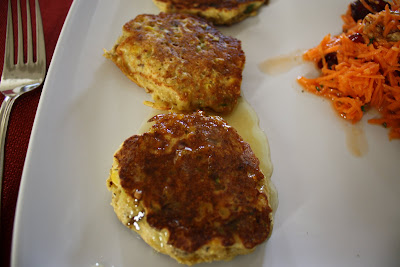