For this recipe, I used a new-to-me product, Nancy’s Cultured Lowfat Cottage Cheese (which also comes in an organic version). While it isn’t specifically lactose-free, the fact that it’s cultured makes it reduced in lactose, and it turns out that I didn’t have any problem digesting it. I was very happy to find this product, because the only other one I could use was Lactaid’s lactose-free cottage cheese, which isn’t available everywhere or every time, so this broadens my options. For the sour cream, I used Green Valley Organics’s lactose-free sour cream. So this dish is full of dairy, but living in the States, I was able to make it lactose-free – I unfortunately doubt that this would be possible in Canada at the moment. 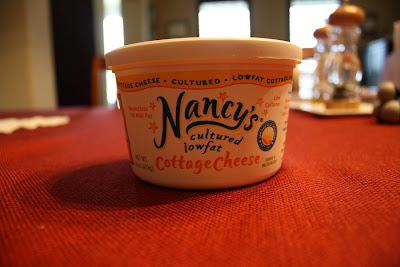 I took some liberties with the seasonings. The original recipe recommends some homemade rosemary-garlic rub, which looks good, but I didn’t want to make it only to end up with another spice mix I never use. That’s also the reason I didn’t get the recommended Spike seasoning. Instead, I used 2 cloves of garlic (grated), dried thyme and dried oregano to flavor the squash. I’ve also started using safflower oil instead of olive oil in most of my cooking. I still make salad dressing with good olive oil, but the only reason I’ve been using it for other purposes is because everyone says that it’s healthy. That’s why it’s always recommended in modern recipes, and all the chefs on television use it. While it is true that olive oil is relatively healthy, it turns out that safflower oil is healthier; it has much a higher percentage of linoleic acid, less saturated fat, and a much higher smoke point. I feel it’s therefore a better choice for most applications, unless you actually want the taste of olive oil (safflower oil is pretty bland, which can be good in cooking and bad in vinaigrettes, for example).

I liked this gratin, but did not love it. It was relatively healthy, though, what with squash and chard in the same dish. I think it could have used a handful of grated sharp cheddar. The Engineer thought it was bitter, and he would have wanted this made into a frittata instead of a spaghetti squash gratin – while that would be good, I feel it defeats the point of this dish!

Preheat oven to 400 °F. Wash the outside of the spaghetti squash if needed, then cut off the stem and blossom end, stand squash upright, and using a large chef's knife, carefully cut in half lengthwise. Use a sharp spoon to scrape out seeds and the slimy material that surrounds them, and discard. Rub cut sides of squash with about ½ Tbsp olive oil for each half, then sprinkle each with 1 tsp rosemary garlic rub or other seasoning of your choice. Spray the roasting pan with non-stick spray (I lined it with tin foil and used oil instead), put squash on baking sheet and pour ¼ cup water around bottom of squash. Roast squash about 45-50 minutes, or until it separates easy into strands when pulled with a fork. Let squash cool for a few minutes, then shred into spaghetti-like strands. Lower the oven heat to 350 °F.

While squash cooks, wash chard leaves if needed and spin dry or dry with paper towel. In two batches, stack up chard leaves on top of each other and slice into thin ribbons, then turn the cutting the board the other way and slice again into small pieces. Chop onion.

Heat 1 Tbsp olive oil in heavy frying pan, add chopped onions, season with Spike seasoning, dried thyme, and black pepper, and sauté until onion is softened, about 2-3 minutes. Add minced garlic and cook about 1 minute more, then add chopped chard all at once. Cook chard about 1-2 minutes, turning a few times, until it's wilted to about half the size it was. (The chard shouldn't be completely cooked, since it will cook more in the gratin.) Turn off heat.

Put 3/4 cup low fat cottage cheese in a fine strainer and rinse with cold water until only the cheese curds remain, then let drain. Spray a glass or crockery gratin dish with non-stick spray or olive oil (I greased a 9”x13” baking dish).

Using a large fork, gently mix the chopped chives or green onion and shredded spaghetti squash into the onion/chard mixture. Combine the sour cream, drained cottage cheese curds, cheddar, parmesan cheese, and beaten egg and mix into the chard/spaghetti squash mixture. Then put the combined ingredients into the gratin dish, and press down so it's evenly distributed in the dish. Sprinkle top with about ¼ cup more Parmesan cheese.

Bake about 30-35 minutes, or until the mixture is bubbling and cheese is browned on top. Serve hot. 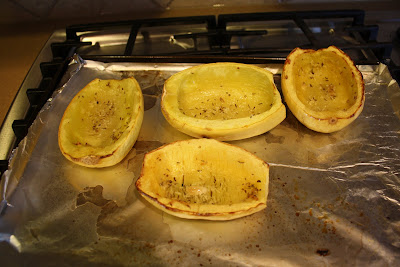 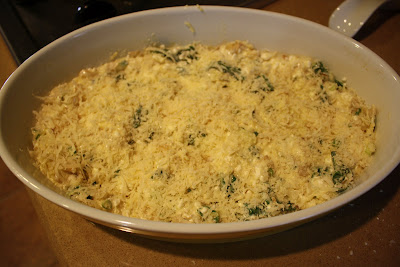 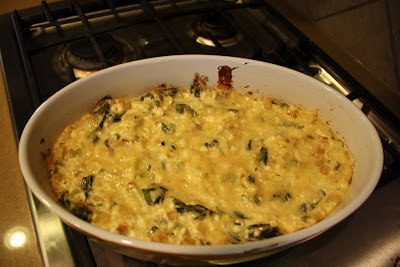 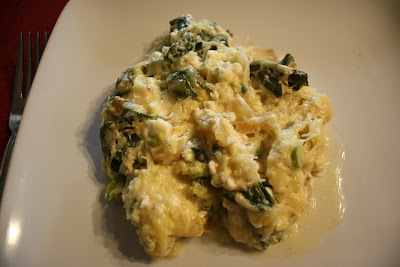