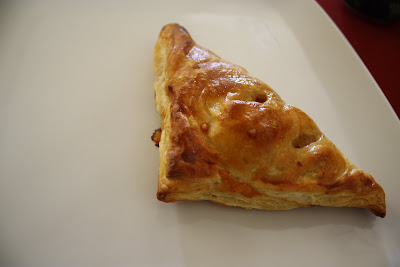 So what did I do with the rest of my bacon after making pasta? I made these turnovers. And they were absolutely awesome. The Engineer and I both loved them, and he went so far as to suggest that we should have a stash in the freezer, like a secret weapon for unsuspecting guests. I would definitely keep these in mind for a Christmas brunch or something similar. If you want them for dinner, serve them alongside a salad.

Remove the puff pastry from the freezer and set it on the counter to thaw, still in its package.

Set a large skillet over medium heat and gently cook the bacon until all the fat is rendered and the bacon is just starting to become golden and crispy. Remove the bacon with a slotted spoon and set it on a paper towel to drain.

Pour off all but one tablespoon of the bacon fat. Still over medium-heat, slowly cook the onions with a pinch of salt until they are completely soft and caramelized. For best caramelized flavor, this should take about 30 minutes (but if you’re pressed for time, you can turn up the heat a nudge and cook them faster).

When the onions are as done as you like them, add the apples and another pinch of salt. Cook for 5-10 minutes until the apples have softened but are still firm in the middle. Stir in the cinnamon and a final pinch of salt. Add the cider vinegar and scrape the bottom of the pan to get up any caramelized brown bits.

Let the cider bubble until the pan is nearly dry again and then remove from heat. Combine the onion mixture and bacon in a bowl. If using, add the cheese when the mixture has cooled slightly.

Heat on your oven to 400 °F. Line two sheet pans with parchment or silpats.

Sprinkle a little flour on your work surface and unfold the puff pastry on top. If there are ridges in the pastry, gently flatten them with a rolling pin. Cut each piece of puff pastry into four equal squares (eight squares total).

Place two spoonfuls of the filling in the middle of each square. Dampen the edge with egg yolk and fold the squares over into triangles. Poke vent holds in the top with a paring knife and brush each turnover with egg yolk. Transfer to the baking sheets, spaced a few inches apart.

Bake for 20-25 minutes, until the tips of each turnover are toasted brown and the tops are golden. Let cool for 10 minutes before serving. (These turnovers are at their flakiest within a few hours after baking. Leftovers stored in the fridge will still be delicious, but not as flaky. I stored half of the turnovers raw in the fridge, covered, for baking another night. If you are planning for the long term, it’s better to freeze the turnovers un-baked and then bake them off individually). 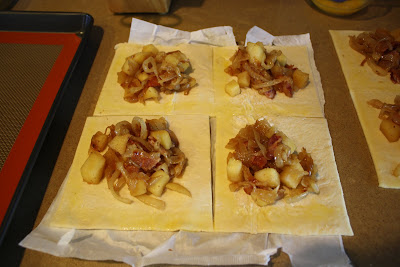 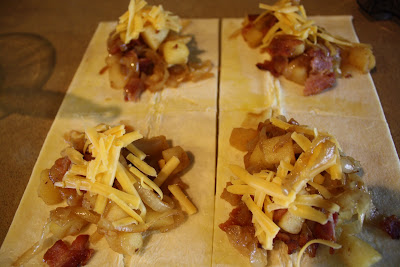 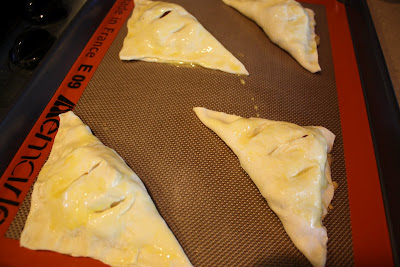 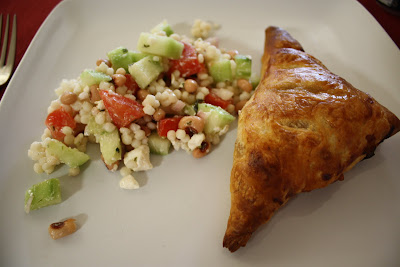 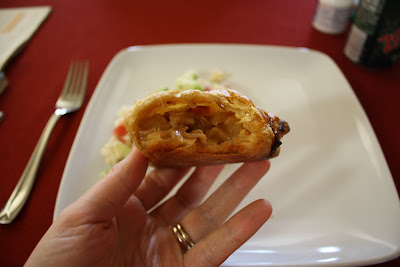