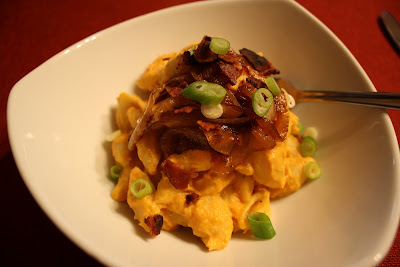 I found this recipe and adapted it according to what I had on hand (so I didn’t make that recipe, but it was the same idea). It was originally called “Healthy Bacon and Pumpkin Pasta”, but that recipe called for evaporated milk and cream cheese, on top of the bacon, so I’m not sure how it qualified as healthy. I changed it by using lactose-free sour cream instead of the evaporated milk and cream cheese, though it think it would have been good with Greek yogurt, too. So obviously my sauce wasn’t the same consistency as the original, but it was very good nonetheless, and lactose-free to boot. I doubled the recipe to make 4 servings. The Engineer made his happy face when he tasted it and said it was very nice; I approve as well. The recipe as written below is mine.

A note on the bacon: we’re now buying Applegate Naturals bacon, which contains natural ingredients (so no nitrates/nitrites and no chemical preservatives); it is made from antibiotic-free pork fed on a GMO-free vegetarian diet; the animals also have space and fresh air throughout their lives. This may not be perfect, but it’s by far better than anything else sold at our regular grocery store (where just finding nitrite-free bacon was a challenge; Applegate seems to be THE brand they have for people like me who are avoiding those, not to mention ethically-raised animal issues). The package contains 8 oz of bacon, whereas most other packages contain 12 oz; I find this actually works better for me, because I have a tendency to use roughly half a package per recipe (it doesn’t matter if the recipe calls for 4 slices, I’ll throw in 6; but now, I really do limit myself to 4).

Cook pasta according to directions. Drain and return to pan. Reduce heat to low. 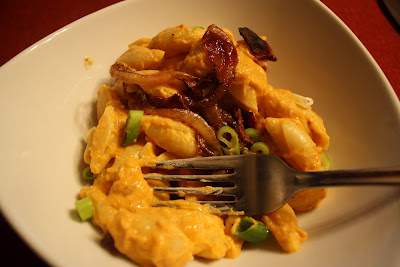