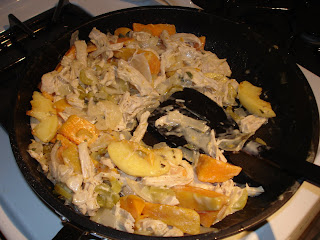 I got this recipe what seems like ages ago (April 2007, apparently!). I had printed it out after seeing it in Martha Stewart Living, and had been stalling on making it because I try to eat lactose-free whenever possible, and this recipe has cream. But now that I’m finally using lactase drops, I decided to go ahead with it, and I was quite pleased with the result. Then again, how wrong can you go with a recipe that starts with cooking an onion in butter and then adds cream? I’m discovering cream all over again! But for one thing, I will cut smaller pieces of food next time. Also, if you are using 15% cream instead of 35% cream (like me, since the thicker cream can’t mix with the lactase properly), you might need to add a little cornstarch mixed with water to the mixture toward the end of the cooking period, to make it thicken up a bit. worry about presentation too much, though – after all, this is hash. 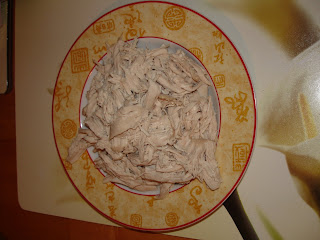 Place the sweet potatoes in a medium saucepan, cover with cold water and bring to a boil. Reduce heat; simmer until just tender, about 7 minutes. Drain and set aside.

Heat 2 Tbsp butter in a large non-stick skillet over medium heat. Add apple; cook until golden, about 10 minutes. Transfer to a plate and set aside. 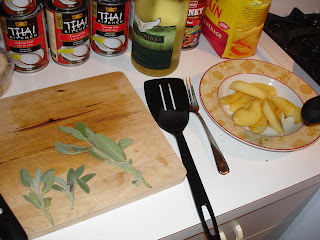 Add the remaining 2 Tbsp butter, onion and celery to the skillet; cook until slightly softened, about 10 minutes. Add wine and cook until liquid has mostly evaporated. Add turkey, potatoes, cream and stock. Simmer until sauce is creamy and vegetables are tender, about 12 minutes. Stir in sage and apple; season with salt and pepper.

To serve, you can spoon the mixture on whole-wheat toast and drizzle with sauce, or eat it as is.
Posted by Amélie at 5:05 PM