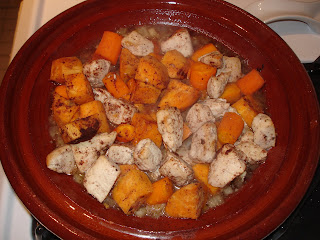 I’d been meaning for years to get a tagine (“eventually some day”), but never quite got around to it. The Engineer and I actually received one as an anniversary present – and we also got some nice placemats, which you probably saw in the previous posts. Who knew that one could get anniversary presents from people other than your spouse? This marriage thing just keeps getting better and better! :) 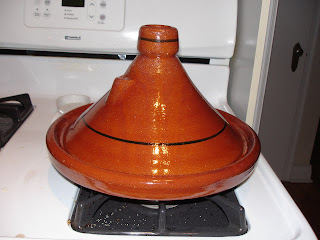 This recipe was originally from Oprah. We changed the quantities a bit, since we were only two for dinner (so we used 2 chicken breasts instead of the 3 pounds of chicken, and cut them into cubes). I’ll give you the recipe as it was published, though, so you can choose for yourself. Also, our tagine is not made for the stovetop, so we put it in the oven at 350 °F; I’ll write both options in the recipe.

And a word of warning about tagines, from Art Smith: Most clay pots need to be soaked and dried for several hours. This is called "seasoning" the pot. If your pot is not seasoned, plan ahead and season it. Once it is seasoned, you'll need to repeat the process about once a year.

Season the chicken with salt and pepper. Add 2 Tbsp of olive oil to a skillet, brown the chicken pieces over medium heat, and set aside.

Place a heat diffuser over your burner. The heat diffuser prevents the pot from burning or getting damaged. Place the clay pot on the diffuser and turn on the burner to medium. (If your tagine is not made for stovetop use, preheat the oven to 350 °F.)

Add the remaining 2 tablespoons of olive oil to the tagine. When hot, add the onion, garlic and spices. Cook until soft, around 6 minutes. (You can also do this in a pan, then transfer to the tagine before the next step.)

Add the combined ingredients to the tagine. Cover the pot and simmer (or put in the oven) for about 40 minutes, or until done. Remove from the oven and garnish the tagine with raisins, toasted almonds and fresh cilantro. Serve with couscous. 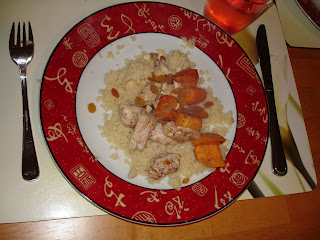