How I conquered my nemesis (or: Broccoli slaw, and a frittata) 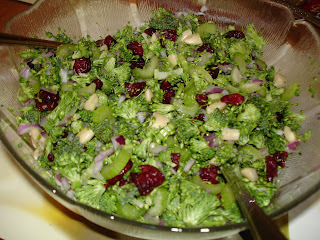 I had mentioned before my aversion to broccoli. I’ve referred to it as my nemesis on several occasions. However, I must admit that perhaps I hadn’t been introduced to it properly. When I was a child, my mother served it cooked (boiled or steamed), on the side of a plate. It was bitter, and I always hated it. My mother, in a misguided effort to help me (hi, Mom!), always said, “At least eat the stem.” So I grew up believing that the stem was the most tolerable part of the broccoli – but really, it’s the toughest and most bitter, right? Aren’t the florets easier to eat, and isn’t that where all the nutrition is anyway?

When I saw on Smitten Kitchen a recipe for broccoli slaw, I decided I would be brave and try it. I finally did, and was very pleasantly surprised. Raw broccoli is not as offensive to me as cooked, and the florets are better than the stem. I must admit I had doubts at first, because the smell as I was cutting it was reminding me of the Brussel sprout fiasco, and the taste wasn’t what I would call pleasant. But I persevered, and with the dressing and other ingredients, this slaw was actually quite good! So here is the recipe thanks to which I have declared a truce with broccoli (but only as long as it’s served like this). It still contains more vitamins and antioxidants in its raw form, as far as I know. 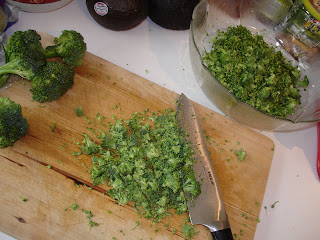 Trim the broccoli and keep the florets. Cut them into small pieces. Put them in a bowl, add the other ingredients and mix. 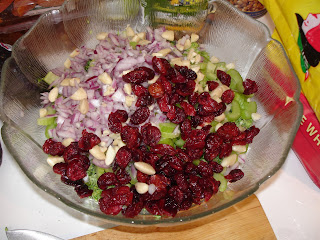 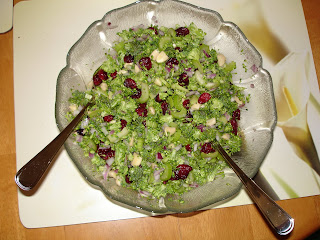 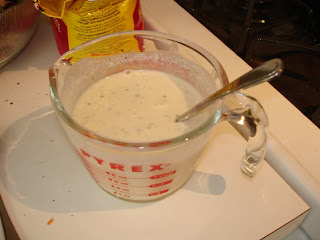 Mix all the ingredients. You can either pour the dressing on the salad, mix and serve, or only dress individual servings right in the plate. 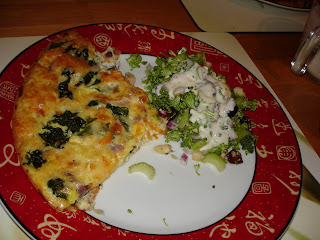 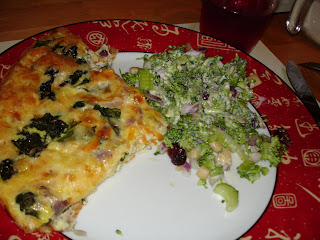 I served it here with a frittata. It’s funny, because I had largely forgotten about the existence of this dish. But I was reminded of it again recently, and I realized that not only is it good, it is also easy – AND a great way to use up whatever is lying around in the fridge. I threw in the rest of the red onion from the slaw, the Swiss chard from this recipe, the grated carrots from that recipe, some green onions, as well as the fontina, mozzarella and parmesan left over from the Engineer’s last pizzas. And eggs, of course. I cooked the red onion in the pan first, added the other vegetables and cooked them until the Swiss chard was starting to wilt. I added the eggs and cheese and put the pan in the oven at 350 °F until the frittata was set, then I broiled it for a few minutes until the top was brown. It was delicious! 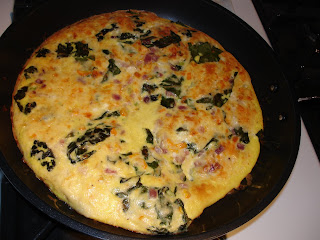 her's another suggestion for your truce with brocoli... but it's not lactose free
http://julienoid.net/affiche_recette.php?id=5

I've already tried broccoli soup, and I must admit I don't really like it either (maybe because it's cooked?). Thanks anyway! :)