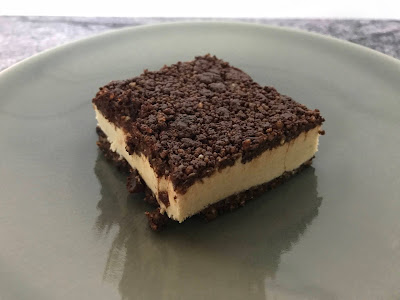 This is another recipe from Practically Raw Desserts (where I got the awesome marzipan buckeye bars). My only beef with the name here is what I expect from a brownie, because there is no “cake” at all here, only a mixture of nuts, dates, and cocoa – to me, that’s more like a gluten-free pie crust, not a gluten-free brownie. But hey, it’s raw too, so I guess a cake is not realistic. I was already used to cashew cream for vegan cheesecake, though, so that didn’t throw me!
Once you know what to expect, these were really good. They are best served straight from the fridge (not the freezer), so that the “cheese” part has a creamy texture. And of course, they’re not too sweet, so that’s what I was looking for! The Fox wasn’t too fond of them, but everyone else liked them.
For the “brownie” layers
1 cup dry pecans
1 cup dry walnuts
1/3 cup cacao powder
1/8 tsp. sea salt
¾ cup pitted dates (I recommend chopping them, and perhaps softening them in hot water)
For the “cheesecake” layer
1 cup cashews, soaked for 2 to 4 hours and drained (I soaked them overnight)
¼ cup water or nondairy milk of choice
2 Tbsp. melted coconut oil
2 Tbsp. lemon juice
½ tsp. vanilla extract
1/8 tsp. sea salt
30 drops liquid stevia (or equivalent sweetener of choice – I used 3 Tbsp. maple syrup), or to taste
For the brownie layers
In a food processor, combine the pecans, walnuts, cacao powder, and salt and pulse until finely ground (be careful not to overprocess). Add the dates, 2 to 3 at a time, pulsing between additions until each date is well-incorporated and the mixture is sticky. Taste for sweetness and add another date or some stevia if desired. (I added a little maple syrup for both taste and consistency, but perhaps I would not have needed it had my dates been softer, hence my recommendation above.)
Press half of the mixture (about 1 heaping cup) firmly and evenly into an 8-inch square baking pan lined with parchment paper for easy removal. Place the pan in the freezer to chill. Set the other half of the mixture aside while you make the cheesecake layer.
For the cheesecake layer
In a high-speed blender, combine the cashews, water, coconut oil, lemon juice, vanilla, salt, and stevia and blend until smooth. You can add more water, a teaspoon at a time, as needed to help the mixture blend. Taste for sweetness and add more stevia if desired.
Remove the pan from the freezer and transfer the cheese- cake mixture onto the brownie layer, spreading it evenly with a spoon or spatula. Place the pan back in the freezer for 1 to 2 hours to allow the cheesecake layer to firm up. Once frozen, remove the pan from the freezer again, and evenly scatter the remaining half of the brownie mixture on top of the cheesecake layer. Gently but firmly press the brownie bits into the cheesecake. You may still be able to see the cheesecake layer underneath; that’s ok. Place in the refrigerator for at least 2 hours before cutting and serving. (It truly is best served from the fridge after this point, as opposed as from the freezer.)
Store the brownies in an airtight container in the refrigerator for up to a week or in the freezer for up to a month. 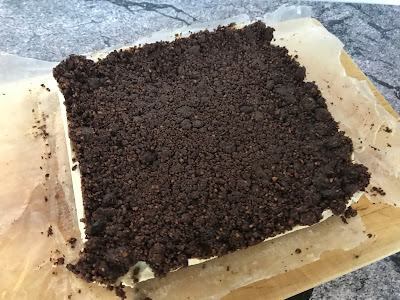 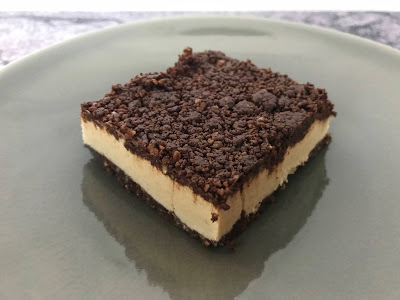