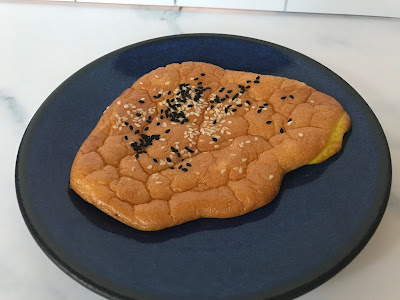 I made cloud bread for the first time. It’s basically something that you can use instead of bread, but it’s more like a light omelet. It’s meant to be used in a sandwich, sort of like this keto bread. The thing is that I don’t really have it in me to make “bread” and then ALSO make a sandwich at the same meal. I think I’d do better at making this bread ahead of time (I don’t know if it freezes well, but cooked eggs usually do, right?). I’d suggest a BLAT, a tuna melt, or a grilled turkey-apple sandwich. The original post also has flavor variations for the cloud bread itself, like pumpkin spice, cinnamon raisin, or everything bagel. The one I made was quite good – I just need to remember to actually use it for sandwiches! Come to think of it, it would make a good substitute for a soft tortilla, too…
This recipe yields 4 small breads.
3 large eggs
½ tsp. baking powder
3 Tbsp. (1.5 oz.) lactose-free cream cheese
¼ tsp. kosher salt
1/8 tsp. onion powder
2 tsp. white or black sesame seeds
Arrange a rack in the center of the oven and heat the oven to 300 °F. Line a rimmed baking sheet with parchment paper.
Separate 3 large eggs, placing the whites in a large bowl or bowl of a stand mixer, and the yolks in a smaller bowl.
Add baking powder to the egg whites. Beat with an electric hand mixer or a stand mixer fitted with a whisk attachment on medium-high speed until stiff peaks form, about 5 minutes for a hand mixer or 2 minutes for a stand mixer.
Place 3 tablespoons cream cheese in a small microwave-safe bowl and microwave in 10-second bursts until very soft, about 30 seconds total. Stir until smooth and let cool slightly.
Add the cream cheese, kosher salt, and onion powder to the egg yolks and stir to combine. Add the egg yolk mixture to the whipped egg whites and gently fold until there are no visible streaks and completely combined.
Dollop a quarter of the batter (about ¾ cup) onto the prepared baking sheet and, using a spoon, gently flatten into a round that's about 6-inches wide. Don’t fuss too much, it doesn’t have to be perfect. (Mine turned out oval for some reason, perhaps because my egg whites were a bit too loose?) Repeat with the remaining batter. Sprinkle each round with ½ teaspoon sesame seeds.
Bake until golden brown, 25 to 28 minutes. Let cool on the baking sheet for at least 20 minutes (the “breads” will firm up slightly as they cool). Gently lift from the parchment paper. 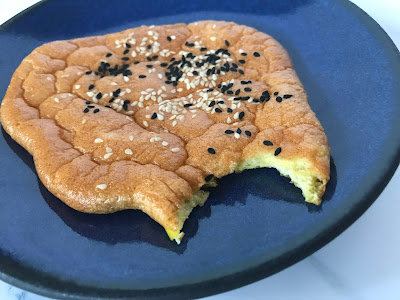