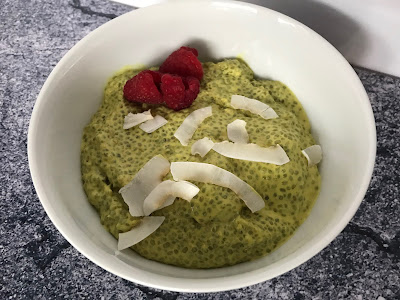 It’s been hard finding low-carb breakfast options, given that I love muffins and banana bread and baked goods in general! I did try Zero Net Carb bread, and it’s… not horrible? I mean, it won’t get any color on it when I toast it (because it’s the sugar content that would normally make it go darker), and if I’m eating it spread with peanut butter, it’ll do. But I have to admit I don’t like it in sandwiches (I tried both grilled cheese and fried egg sandwiches), and it’s not something that I enjoy eating. To be honest, I typically can’t quite finish the sandwich because I get really sick of it. I do think it could be something to buy once in a while, though, to help get me through a breakfast rut. And it comes in different flavors, so maybe I could explore those options at a later date.
That being said, one of my favorite breakfast options these days is chia puddings. Chia seeds contain protein and fiber, so they help keep me full until lunch. They also contain calcium and omega-3s, so they are considered very healthy. I really enjoyed this raspberry coconut chia pudding from Ricardo, which I served with sliced bananas, raspberries, and pumpkin seeds. 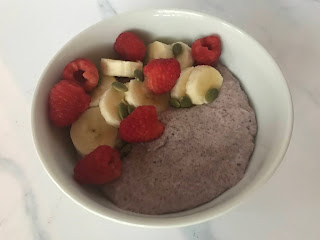 I also really enjoyed this golden milk pudding with orange and ginger from Vegan Richa. Turmeric has known anti-inflammatory properties, and inflammation is a symptom of PCOS, so this felt more targeted to me. That being said, as much as I liked it, this pudding (as well as the raspberry one above) is made with coconut milk, which is high in saturated fat. Next time, I will try using a plant-based milk, such as coconut milk beverage, to see if I can achieve a similar (or at least pleasant!) consistency with less fat. I garnished this pudding with coconut chips and raspberries. The quantities below yield 2 servings.
1 can coconut milk (or 1 1/3 cup non-dairy milk of choice?), divided
1 tsp. turmeric
¼ tsp ground ginger
¼ tsp ground cinnamon or cardamom or other spices
a good dash of black pepper
1 Tbsp. orange preserves (or zest of half a small orange)
2 Tbsp. maple syrup, or to taste
6 Tbsp. chia seeds
Heat 1 cup of the coconut milk, turmeric, ginger, cinnamon, pepper over medium heat until just boiling. Take off heat.
Add rest of the coconut milk, orange preserves, maple syrup and chia seeds and mix vigorously. Taste and adjust sweet, flavor if needed. Let it sit to cool completely for 10 to 15 minutes.
Whisk the mixture vigorously again. The chia seeds should have expanded a bit and should distribute well. You can directly serve at this point, or pour into serving containers and chill overnight for more hydrated chia seeds and thicker pudding (this is my preference). 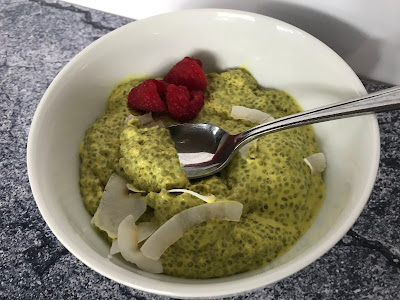