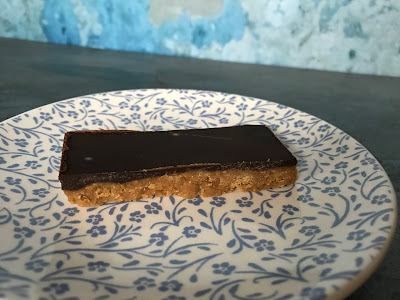 I made this chocolate almond tart from Famille futée 3 not once, but twice. It’s a recipe that, according to the headnote, “only calls for 5 ingredients, one of which is chocolate. Case closed.” The first time, I used natural almond butter, but the crust fell apart and the chocolate part was too hard. The second time, I used creamy peanut butter, which the headnote said would make the dessert taste like a giant Reese’s. It didn’t! It was better, but it still had all the problems of the original to some extent, and it really wasn’t as good as it looked.
Then I ended up making marzipan buckeye bars from the book Practically Raw Desserts by Amber Shea Crawley. I used an 8-inch square baking pan and made a few substitutions based on what I had on hand (see below). This was so delicious! The almond extract here was wonderful. All 4 of us loved it, which is really rare! And, bonus, it doesn’t have *too* many carbs.
For the marzipan layer
1 cup almond butter (I used ½ cup natural almond butter and ½ cup creamy peanut butter)
¼ cup coconut nectar (I used maple syrup)
½ tsp. almond extract
1 big pinch of sea salt
¼ cup coconut flour
For the chocolate glaze
½ cup melted coconut oil
¼ cup cacao powder
¼ cup maple syrup
½ tsp. vanilla extract
1 big pinch of sea salt
For the marzipan layer
Combine the almond butter, coconut nectar, almond extract, and salt in a food processor, and pulse until smooth and combined. Add the coconut flour and pulse until the mixture comes together and starts to ball up. Transfer the ball of dough to a 6- to 8-inch square baking pan (lined with waxed paper for easy removal, if desired) and use a spatula or your fingers to press it down evenly. Place the pan in the freezer while you make the topping.
For the chocolate glaze
Combine the oil, cacao powder, maple syrup, vanilla, and salt in a blender. Blend on low speed until smooth, stopping to scrape down the sides if necessary. Alternatively, thoroughly whisk all ingredients together in a medium bowl (this is what I did, but I could have rinsed out the food processor and reused it too – no point in getting the blender dirty for this, really).
Remove the pan from the freezer and immediately pour the glaze over the marzipan, tilting the pan to spread it around evenly. Freeze for at least 2 hours before slicing and serving.
Store the bars in an airtight container in the freezer for up to 3 weeks. Serve frozen (don’t worry, they’re not super hard). 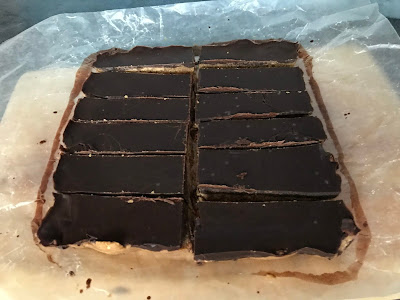 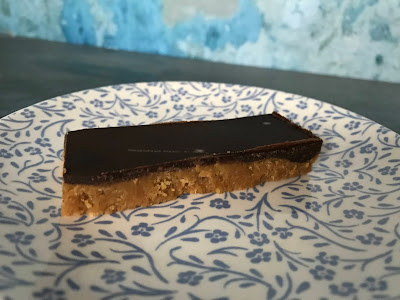