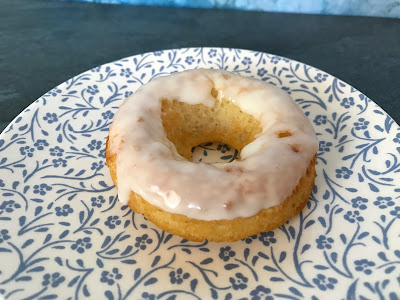 I tried a few new donut recipes in the past months. These buttermilk red velvet donuts looked fantastic on the original post, but turned out to be a complete disaster. The batter was too loose, it baked up shapeless, and the confections (I can’t call them donuts) completely fell apart coming out of the pan. Luckily, I was able to salvage a dessert out of it because I still had vegan buttercream left over from the Fox’s birthday – I always keep leftover icing in the fridge for a while even if I have no plans for it, and every so often it comes in handy! So I piled some red velvet cake crumbs in each plate, topped them with a dollop of buttercream and some rainbow sprinkles, and saved the day. If I’d had candy melts and more time, I would totally have made cake pops with it! And then these ”healthy” vanilla donuts were… just not worth it.
All’s well that ends well, though, because eventually I came across these lemon pound cake donuts on Weelicious and they were just what we’re looking for. The Engineer actually said that these were his favorite donuts of all those I’ve made. I used lemon juice to make the glaze, but next time I would use coconut milk to make a thicker, more opaque white icing, and I’d also double the quantities. I felt like these donuts stuck to the pans a bit more than regular donuts, but I was also using a new brand of oil spray to grease the tins, so it could have been that. They were still in decent shape, especially with the icing!
For the donuts
1 cup granulated sugar
1 stick (½ cup) lactose-free butter, softened
3 large eggs
½ tsp. vanilla extract
1 ½ cups all-purpose flour
½ tsp. baking soda
¼ tsp. kosher salt
½ cup lactose-free sour cream (I used Greek yogurt)
¼ cup lemon juice
1 tsp. lemon zest
For the glaze (consider doubling this; see note above)
1 cup powdered sugar, sifted
1-2 tsp. lemon juice, milk OR lactose-free cream or coconut milk (to make the icing white)
Preheat oven to 325 °F. Grease 18 donut pans (I mean, pans for 18 donuts; I used 3 pans that make 6 donuts each).
Using a standing mixer or electric mixer, cream the butter and sugar until light and fluffy, about 5 minutes.
Add the eggs one at a time, making sure to incorporate each one.
In a separate bowl, whisk together the flour, baking soda, and salt and set aside.
Whisk the vanilla, sour cream, lemon juice and lemon zest in a separate bowl.
Add the flour and sour cream alternately to the egg mixture one half at a time, until combined.
Spoon or pipe the batter into greased donut pans and bake for 18-20 minutes, until a toothpick inserted in the center comes out clean. Allow the doughnuts to cool completely before glazing.
Mix together the glaze ingredients until smooth. Glaze the donuts (I like to dip them in the glaze). 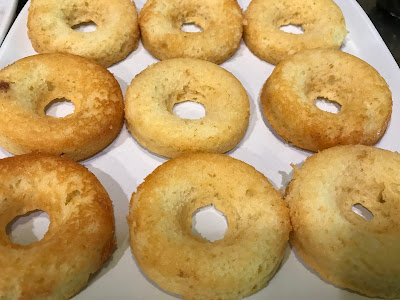 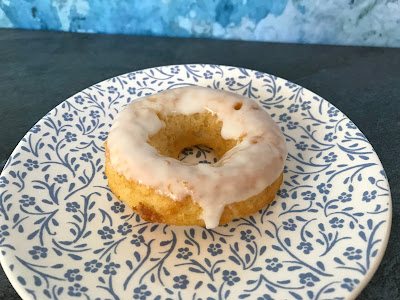