I know I posted a scone recipe very recently, but then I realized that I had one which calls for homemade kumquat marmalade as a side, and I had to make it while there were still some kumquats to be had! It’s an Irish scone recipe published by Zoë François (of Zoë Bakes). I used a newly purchased hexagonal biscuit cutter, which helps reduce dough scraps produced with round cutters. (I mean, I could just slice everything in squares at that point, but it wouldn’t be as nice, right?)

The only change I’d make would be to slice the kumquats more finely. It would make for a more pleasant (to me) texture than to just cut them in half, and it would allow for more thorough removal of seeds. Also, when the recipe says to cook until it is the consistency of honey, I think it means *warm* honey – I cooked it a bit longer, but I think I’d have been happier with a slightly thinner consistency in the end.
I believe Zoë François served these with clotted cream in her blog post; I used the last of a container of SoDelicious CocoWhip, but it is entirely optional. 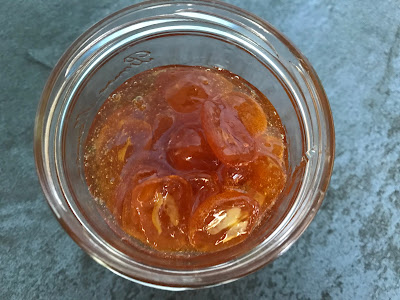 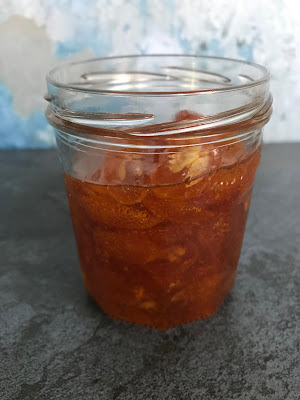 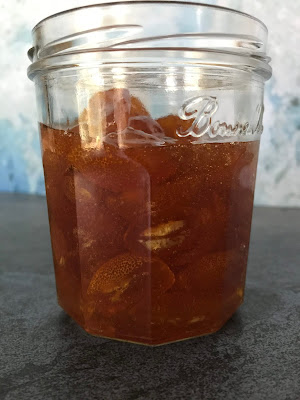 For the scones
4 cups (520 g) all-purpose flour
1 Tbsp. baking powder
½ tsp. baking soda
¼ tsp. salt
3 Tbsp. sugar, plus more for the tops (the topping is optional)
4 oz (113 g) lactose-free butter, cool but not quite hard, so you can easily work it into the flour
2 cups lactose-free buttermilk (2 Tbsp. vinegar or lemon juice, topped with lactose-free milk)
egg wash for brushing top (optional)
For the kumquat marmalade (I halved these amounts)
1 lb. kumquats, cut in half lengthwise (I’d slice and seed them)
1 pinch salt
1 ½ cups sugar
3 Tbsp. corn syrup (optional, but it keeps the marmalade from crystalizing)
For the scones
Preheat oven to 400 °F, place the oven rack in the middle of the oven. line a baking sheet with parchment paper.
In a large bowl, whisk together the flour, baking powder, soda, salt, and sugar.
Cut the butter into small pieces and add to the bowl of dry ingredients. With your fingers, rub the butter into the flour mixture until it resembles corn meal (I always do this in the food processor). The flour should be fully coated with the butter and it will turn creamy in color.
Gently add enough of the buttermilk to create a moist dough that still holds its shape; you may not use all of the buttermilk. There should be a few dry patches at the bottom of the bowl as you are mixing in the buttermilk.
Turn the scone dough out onto the work surface and fold the dough with a bench scraper, so you are pressing any dry flour into the dough and folding it as you go. This kneads the dough gently. Do this about 6 times.
On a lightly floured surface, pat the dough into an inch-thick rectangle. Use a 3-inch biscuit cutter to press the scones into shape. Very gently press the scraps together and cut out more circles.
Place the scones at least two inches apart on the prepared baking sheet. Brush the scones with egg wash and sprinkle with a little bit of sugar.
Bake until they are golden brown and set, about 18-20 minutes.
For the kumquat marmalade
Put the kumquats into a pot and cover with water and add the salt. Bring to a simmer.
Strain the kumquats. Add the kumquats, sugar, corn syrup (if using) and enough water just to cover the fruit. Simmer on medium low until the syrup is the consistency of honey (I’d say slightly warm honey).
Pour into a jar and allow it to cool. The kumquat marmalade will thicken as it cools. It can be refrigerated for a week. 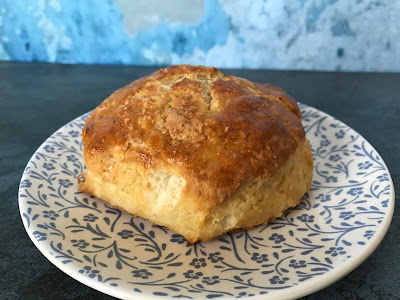 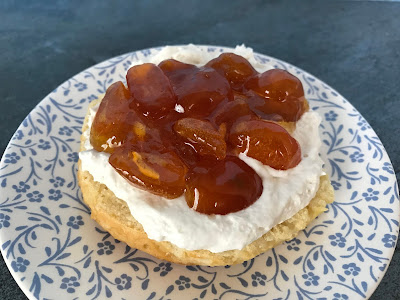 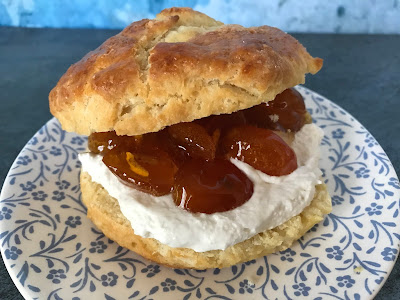