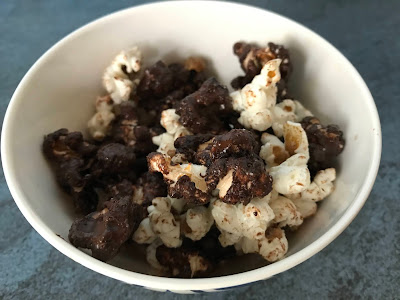 This recipe is from Ashley Rodriguez’s Let’s Stay In. Half the popcorn is white (flavored with brown butter and salt) and half is chocolate. It’s beautiful, though I should warn you that it WILL make your hands dirty as you eat, so it’s perhaps not the best thing to serve if you’re watching a movie on the couch. That being said, if you did want to watch a movie, I can’t help but recommend one with Two-Face (either Batman Forever or The Dark Knight, depending on the age of the viewers). Maybe it would also be good for the upcoming Cruella? Anyway, we all really liked it!
I added a method for popping the corn, since none was provided; I know I’ve also made some in the microwave in a brown paper bag, without any oil, but couldn’t remember how and googling a random method was faster than looking it up.
4 Tbsp. coconut oil
½ cup popcorn kernels (about 6 cups popped)
½ cup (1 stick) lactose-free butter
¼ cup brown sugar
2 Tbsp. cocoa powder, sifted
½ tsp. sea salt, plus more to finish (I used small crystals)
¼ tsp. baking soda
¼ cup (40 g) finely chopped chocolate
Heat the oil in a 3-quart thick-bottomed saucepan on medium-high heat. Put 3 or 4 kernels into the oil and wait for them to pop before adding the rest. Once you’ve added all the kernels, shake the saucepan a bit to get them in an even layer, then cover the pot, ideally leaving the lid slightly ajar to prevent too much steam from accumulating. Remove from the heat for about 30 seconds (this lets the kernels heat evenly in the hot oil), then put the saucepan back on the heat. The corn should start popping quickly. As it does, give the saucepan a shake every once in a while. Once the popping slows to several seconds between pops, turn off the burner and pour the popcorn out into a large bowl. In the case of this recipe, I recommend letting it cool and then doing your best to remove the unpopped kernels.
Split the popcorn evenly between 2 large bowls. Preheat the oven to 250 °F. Line a sheet pan with parchment paper or a silpat and set aisde.
Melt the butter in a small saucepan over medium-high heat until bubbling and frothy. When the milk solids start to caramelize and the butter smells nutty, transfer 2 tablespoons to a small bowl and set aside. To the rest of the butter, add the brown sugar, cocoa powder, ½ teaspoon sea salt, and baking soda. Bring back to a boil, then cook, whisking continuously, until sugar dissolves, about 1 minute.
Pour this mixture over one of the bowls of popcorn. Stir to coat well. Dump the popcorn mixture onto the prepared sheet pan, then bake for 30 to 40 minutes, stirring every 10 minutes. (You’re essentially making popcorn granola here, getting the popcorn dry.)
Remove the popcorn from the oven, then transfer the chocolate popcorn back to its bowl and quickly stir in the chopped chocolate. (If your chocolate is not so roughly chopped or if you wait too long, the chocolate won’t melt completely – if that’s what you’re going for, that’s fine too.) Let the chocolate cool on the popcorn, about 20 minutes (or put the bowl in the refrigerator to speed things up.)
Meanwhile, add the remaining 2 tablespoons brown butter to the plain popcorn (if the butter has hardened, just put it in the microwave a few seconds). Season the plain popcorn with sea salt to taste.
Combine both popcorns in a large bowl and serve. Keep any leftovers in an airtight container for up to a few days. 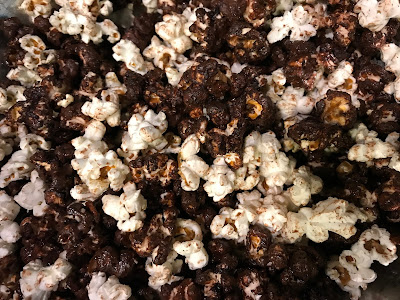 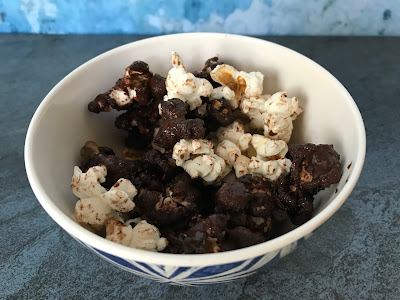