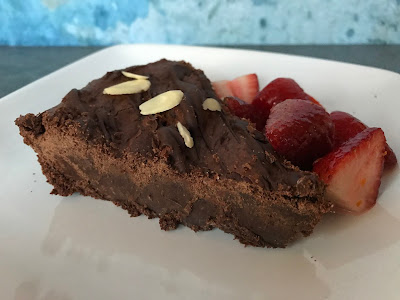 The Engineer and I decided to have a seder this year for the first time, and it went really well. To me, this meal is particularly fun because it’s not just about traditional foods, there are a whole lot of traditional activities as well (examples here for newbies); we also took some liberties with the Haggadah, mostly adapting (and greatly shortening) from this one, though I was partial to this 10-minute virtual version as well.
Making a meal that is Kosher for Passover can be intimidating if it’s your first time, but I knew which dessert I wanted to make. I had torn out this chocolate truffle pie recipe from Bon Appétit what I thought was 4 or 5 years ago, but it turned out to be exactly 10 years ago. Well. I had to make it for dessert now that we wanted an “official” Passover meal!
(We haven’t nailed down our go-to menu yet. The Engineer made a plate of smoked salmon and crudités as well as chicken schnitzel crusted with matzo meal. I made a simple apple cinnamon charoset, and we had the mandatory matzo. But it feels like there should be a matzo ball soup in there somewhere! I might reread this for inspiration next year. We served white grape juice – juice because I like it better than wine and we have kids; white because I’m the one laundering linens and children’s clothing in this house.)
The original recipe was also served with orange-champagne sabayon, but I didn’t bother making it. I mean, if the truffle pie had called for a bunch of whipped egg whites, thereby leaving me stuck with a bunch of egg yolks, I would totally have gone for it, but that just wasn’t the case. Strawberries were plenty as an accompaniment. I’m not sure that “pie” is the right term for this dessert; even though it’s baked in a pie dish, it’s more like a cake to me. And despite what the original recipe said, serve this at room temperature, not chilled!
While this was very good, I think that nobody truly loved it. Maybe next year I’ll make my poppy seed cake or my flourless chocolate cake, both of which are pareve as well. There are more dessert ideas here. Puddings are also typically a good choice for Passover, like this peanut butter pudding.
For the truffle pie
¼ cup almond meal (or very finely ground almonds)
¼ cup matzo cake meal
¼ tsp. salt
1 lb. + 1 oz bittersweet chocolate (do not exceed 61% cacao), chopped
6 Tbsp. (¾ stick) + 1 Tbsp. pareve stick margarine
3 large eggs
¾ cup sugar
1 Tbsp. vanilla extract
1 Tbsp. finely grated orange zest
sliced almonds, lightly toasted
For the strawberries
¼ lb. strawberries, hulled, sliced
2 Tbsp. sugar
1 tsp. finely grated orange zest
For the truffle pie
Preheat oven to 350 °F. Grease a 9-inch glass pie dish with margarine (I think mine is 10 inches).
Whisk first 3 ingredients in small bowl. Combine 1 pound chocolate and 6 tablespoons margarine in large microwave-safe bowl. Microwave in 20- to 30-second intervals until smooth, stirring often. Set aside to cool. (I did this in a double boiler.)
Beat eggs in large bowl 1 minute. Add sugar and vanilla. Beat until thick and pale yellow, 3 to 4 minutes. Beat in orange peel, then chocolate mixture. Reduce speed to low; beat in dry ingredients. Transfer batter to pie dish; place on rimmed baking sheet.
Place baking sheet with pie in oven. Bake pie until cracked on top and tester inserted into center comes out with moist crumbs attached, 45 to 50 minutes (mine was more like 37-40 minutes). Cool to room temperature (center will fall).
Combine 1 ounce chopped chocolate and 1 tablespoon margarine in microwave- safe bowl. Microwave in 15-second intervals until glaze is smooth, stirring often.
Drizzle glaze over pie. Sprinkle with almonds.
For the strawberries
Toss berries, sugar, and orange peel in medium bowl to blend. Chill until ready to serve, up to 4 hours.
Cut pie into wedges; place on plates. Serve with strawberries. 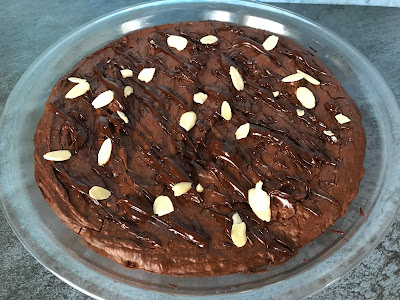 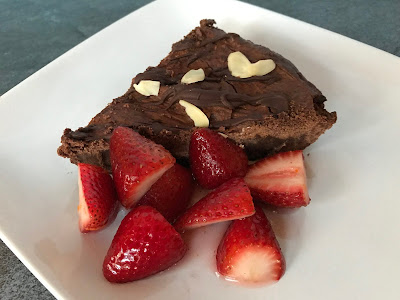