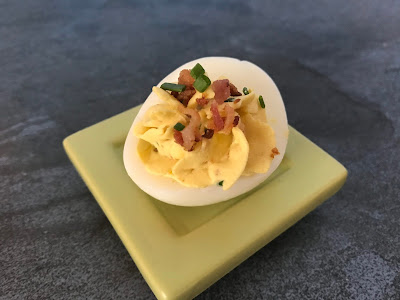 This Easter, I tried my hand at deviled eggs again. I had messed them up two years ago (by following the instructions, mind you), and I couldn’t make them last year because eggs were too scarce in the early part of the pandemic. This time, I decided to take a shortcut and use store-bought hard-boiled eggs as an ingredient. It saved me a lot of time and effort and made the process not-at-all overwhelming! We all really liked them, but I think the Engineer liked them most of all, and he had to use self-restraint not to polish them off in one sitting. The Little Prince was also a big fan!
The recipe is from Cook’s Illustrated, though I doubled the amounts and reduced the vinegar slightly; you could also add sage and shallots in the fall. The recipe below calls for 12 eggs, which means 24 egg halves. I piped the filling in the eggs because I thought it was prettier than spooning it in; you can use either a plain tip or star tip.
4 slices bacon, chopped
12 hard-boiled eggs (homemade or store-bought)
4 Tbsp. mayonnaise
2 tsp. Dijon mustard
2 tsp. distilled white vinegar
¼ tsp. salt
1 pinch cayenne pepper (I feel like paprika would be more classic here)
2 Tbsp. minced fresh chives
Cook bacon in 10-inch skillet over medium heat until crispy, 5 to 7 minutes. Using slotted spoon, transfer bacon to paper towel–lined plate. Reserve 2 tablespoons fat in the pan. (Once the bacon has cooled, you can crumble it more finely.)
Slice each egg in half lengthwise with a paring knife (to do this, sweep the blade cleanly down the center, and wipe the knife after each egg). Transfer yolks to bowl; arrange whites on serving platter.
Mash yolks with fork until no large lumps remain. Add mayonnaise and mustard and use rubber spatula to smear mixture against side of bowl until thick, smooth paste forms, 1 to 2 minutes. Add reserved bacon fat, vinegar, salt, and cayenne and mix until fully incorporated. Stir in three-quarters of bacon and chives.
Transfer yolk mixture to small, heavy-duty plastic bag (I used a large star piping tip). Press mixture into 1 corner and twist top of bag. Using scissors, snip ½ inch off filled corner. Squeezing bag, distribute yolk mixture evenly among egg white halves. Sprinkle each egg half with remaining bacon and chives and serve. 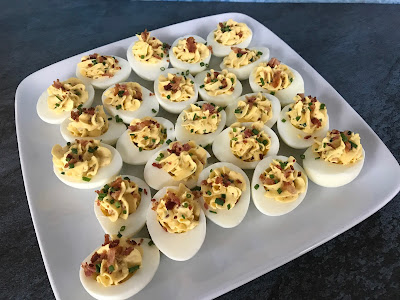 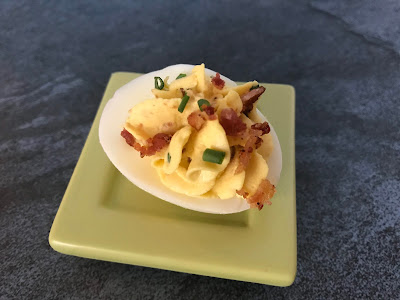 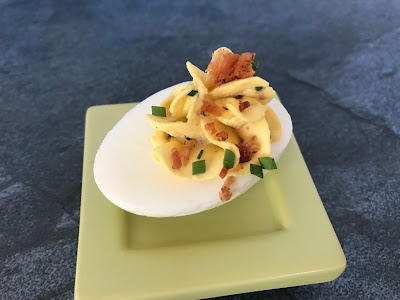 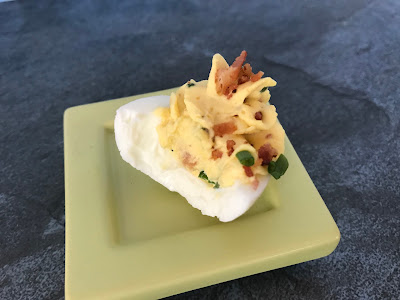