I tried a sausage casserole for which I used sausage crumbles, a red bell pepper, and hidden vegetables in the form of cauliflower Veggie Tots. Somehow, it wasn’t as good as I thought it would be, and the kids were both totally over it after one serving over lunch – even though I had made it with them in mind. Several weeks later, I tried a different one, in which the vegetables are NOT hidden, and… not only did it taste much better, but the kids were more into it as well! (To be fair, they did pick out most of the vegetables, but at least they were interested in having it again the next day.)
I used Eckrich smoked sausage (their Polska Kielbasa specifically), which we all love over here. It’s a great addition here not only because it’s full of flavor, but also because it is already cooked. Keep those attributes in mind if you substitute.
I served it with a side salad topped with silan tahini vinaigrette. This casserole made for a great dinner, but would also be good for breakfast, brunch, or dinner. I’ll have to make it again!
1 package (13 oz.) Eckrich smoked sausage, sliced and chopped
1 Tbsp. butter
½ red onion, chopped
1 red bell pepper, chopped
1 green bell pepper, chopped
1 ¼ cup mushrooms, chopped
1 tsp. salt ½ tsp. pepper
2 cups spinach, roughly chopped
1 cup cherry tomatoes, halved
12 eggs
1/3 cup lactose-free milk
¾ cup lactose-free shredded mozzarella cheese
Preheat oven to 375 °F and grease a 9”x13” casserole dish.
Chop all veggies into bite-sized pieces.
Heat a large skillet over medium heat, add butter and then add onions and bell peppers. Let cook for 3 minutes and then add smoked sausage, mushrooms, salt and pepper. Cook for 3 more minutes and then remove from heat and stir in spinach and sliced tomatoes. Pour into the prepared dish. (If you want to prep the dish ahead of time, stop at this step and refrigerate until you are ready to continue.)
In a separate bowl, put all your eggs and milk and whisk together. (You can add extra cheese into this mixture if you would like, but I didn’t.)
Pour egg mixture into the casserole dish, gently stir to make sure the eggs are spread out, top with cheese, and bake for 45 minutes. Serve warm! 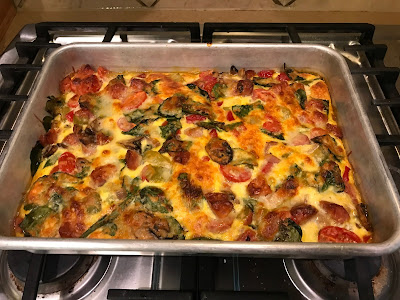 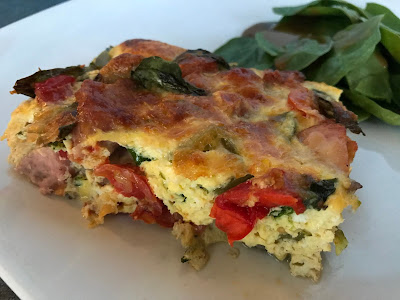