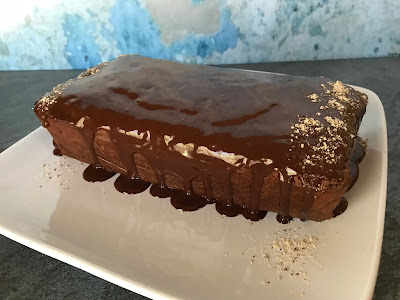 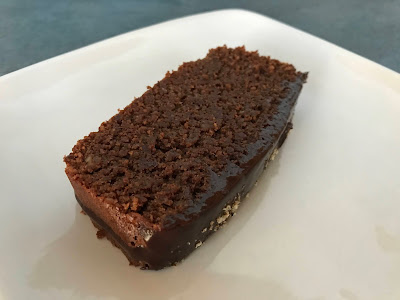 This recipe is from Bon Appétit (I came across it online first, then saw it in my print copy). “Café de olla,” from Mexico, is a combination of ground coffee, piloncillo, and cinnamon – admittedly, mine was far from authentic here because I only used a pinch of coffee and a pinch of cinnamon, and brown sugar instead of the piloncillo. This cake is made from ground nuts, and is delicious either cold or at room temperature, especially a day after being made.
I changed the amounts slightly to make things easier (like 1 stick or 8 Tbsp. butter instead of 7 ½ Tbsp., and an even 6 oz. chocolate instead of 150 g which comes out to 5.3 oz.). The amounts of chocolate were also inconsistent in the print, with the same weight of chopped semisweet chocolate being referred to once as 1 cup (in the cake) and once as 1 ½ cups (in the ganache); it’s been “corrected” in the online version to use 200 g in the ganache, which makes more sense, but is still not consistent with the volumes. Since my ganache didn’t thicken much at all, I’ll use the increased amount of chocolate below. Even then, however, I’m warning you that you’ll have way too much ganache – you can leave it in a bowl on the countertop and have something near pudding-like consistency the next day, assuming you use coconut milk like I did, or just halve the amounts.
For the cake
8 Tbsp. (1 stick) lactose-free butter or vegan margarine
6 oz. semisweet chocolate, chopped
1 ¼ cups (125 g) raw pecans, plus chopped for serving
1 cup + 2 Tbsp. (125 g) almond flour or meal
½ tsp. Diamond Crystal or ¼ tsp. Morton kosher salt
6 large eggs
¾ cup (150 g) granulated sugar
For the ganache (consider halving) and assembly
7 oz. semisweet chocolate
¾ cup lactose-free cream or coconut milk
1 Tbsp. corn syrup (or maple syrup for a vegan version, but the ganache will be thinner; or omit it)
1 Tbsp. finely ground espresso or other dark roast coffee
½ tsp. Ceylon cinnamon
½ tsp. grated piloncillo or brown sugar
1 Tbsp. lactose-free butter
1 pinch kosher salt
For the cake
Place a rack in middle of oven; preheat to 325 °F. Lightly butter a 9x5" loaf pan; line with parchment paper, leaving a generous overhang on long sides. Butter parchment.
Combine butter and chocolate in a medium bowl and set over a large saucepan of simmering water (do not let bottom of bowl touch water). Heat chocolate and butter, stirring occasionally, until melted and smooth. Remove bowl from heat and set chocolate mixture aside.
Pulse pecans in a food processor until somewhat finely ground (it’s okay if there are some coarser pieces). Pulse in almond meal and salt; set aside.
Beat eggs in the bowl of a stand mixer fitted with the whisk attachment on medium-high speed until fluffy, about 2 minutes. With the motor running, gradually stream in sugar and beat until mixture is very pale and nearly doubled in volume, about 1 minute. Stream in reserved chocolate mixture and beat until no streaks remain. Remove bowl from mixer and fold in reserved pecan mixture with a rubber spatula, making sure to scrape bottom of bowl, until well incorporated. Pour batter into prepared pan and tap pan on counter to remove any air bubbles.
Bake cake, rotating pan halfway through, until a tester inserted into the center comes out with just a few moist crumbs attached, about 1 hour. Transfer to a wire rack and let cool in pan.
For the ganache and assembly
As soon as the cake is almost cool, place chocolate in a medium bowl. Bring cream, corn syrup, coffee, cinnamon, and piloncillo in a small saucepan to a faint simmer over medium heat. Pour over chocolate, whisking constantly until melted and smooth. Add butter and salt and whisk until butter is melted and ganache is shiny and smooth. Let cool until thickened slightly, 15–30 minutes.
Turn cake out onto a large plate or cake stand and turn right side up. Pour ganache over (it should flow over the sides but not quite hit the plate). Scatter chopped pecans over as desired; chill until ganache is set, 10–15 minutes. 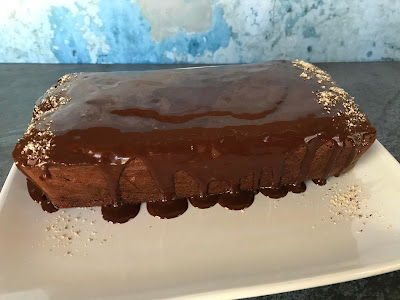 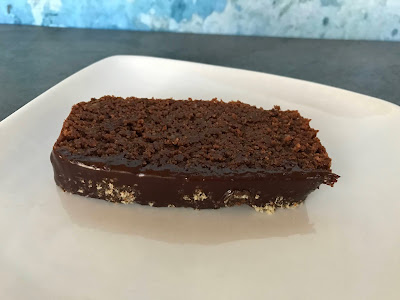 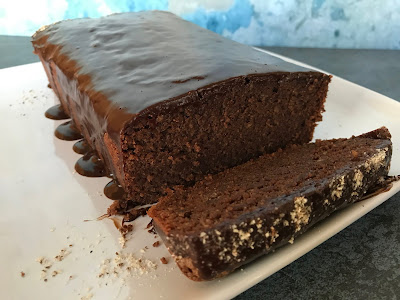