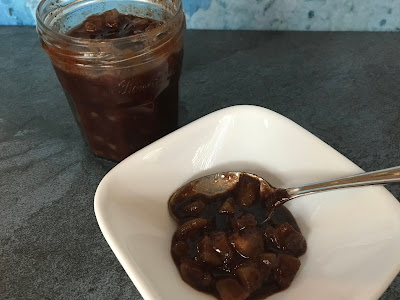 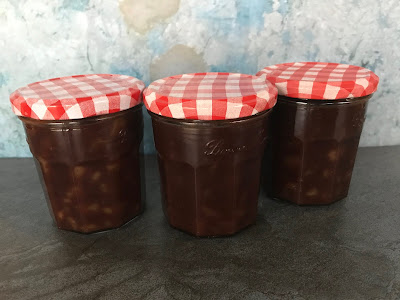 I had bookmarked this pear and chocolate jam recipe forever ago and finally decided to make it. I halved the amounts below (4 pears, 1 ¾ cups sugar, 1 pinch salt, 3 oz. chocolate) and got 3 jars full (I believe Bonne Maman jars are half-pint jars?). Again, I didn’t bother with proper canning procedure and kept everything in the fridge while trying to use it up quickly. I couldn’t get it to quite the right temperature (it would go no higher than 205 °F and started burning a bit at that point), so it’s a bit loose – more like a sauce than a proper jam, I think.
This jam is particularly good on croissants, as well as crêpes and pancakes. That being said, I feel like the jam is grainier than I expected, because of the pears. I wonder if that would have been attenuated had I chopped the pears more finely or cooked them longer…
2 ½ lbs. ripe pears (approximately 7-8 pears)
2 lemons, juiced
3 ½ cups granulated sugar
½ tsp. ground cinnamon (I omitted it)
5 ½ oz. good quality dark chocolate (70% minimum, higher is better)
Prepare a boiling water bath canner and 5-6 half pint jars.
Peel, core and chop pears. Place them in a wide, non-reactive pan with the lemon juice and 2 tablespoons water.
Bring to a simmer over medium heat, stirring occasionally, until pears begin to soften and break down.
While pears cook, chop chocolate and set aside.
Once pears are quite soft, add sugar and cinnamon. Increase heat to medium-high. Cook, stirring regularly, until the jam reaches 220 °F (see note above).
Remove the pot from the heat and scrape in the chocolate. Stir until it is fully melted.
Funnel into prepared jars. Wipe rims, apply lids and rings and process for 10 minutes.
When time is up, remove jars from canner and place on a folded kitchen towel to cool.
Once jars are fully cooled, test seals. Any unsealed jars should be refrigerated and used promptly. Sealed jars can be stored at room temperature for up to one year. 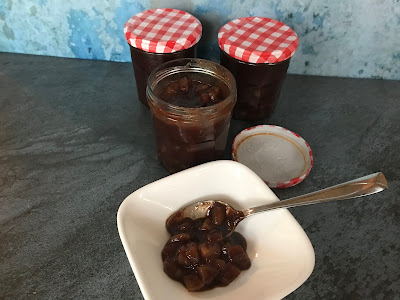 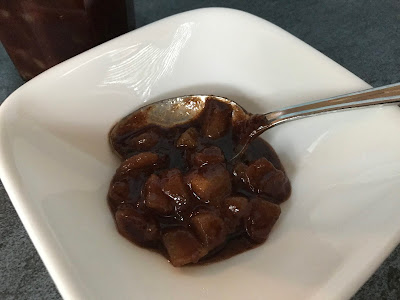 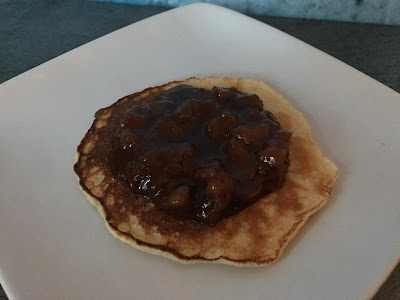