It’s a rainy day here today. A rainy week, actually. Perhaps a hearty beef and maple stew would not be out of place. Or soup, like matzo ball soup. I’d been meaning to cook up a homemade version of my matzo ball soup, so I ended up comparing different versions (like Bon Appétit’s or this gluten-free version from The Kitchn), but in the end, it was Smitten Kitchen that won out.
This soup recipe is in two parts: making chicken broth, then using some of it to make the actual soup. The ratios in my chicken broth were off, because I had 5 pounds of chicken wings, but then only 2.5 quarts of water would fit in my stockpot (I added another 2 cups once the broth was strained and cooled, so 3 quarts total). My broth turned to gelatin in the fridge, but that’s not a big deal because it liquefied again on the stovetop, obviously. As for the matzo balls: the amounts below make 9 matzo balls for me, so feel free to double or triple depending on how many people you are serving. However, I would recommend only making the balls for one meal at a time, as they don’t really keep well.
Despite the fact that my broth was more concentrated than the recipe, the Engineer found it watery and bland. I agree that it could have used more salt. Honestly, unless I really wanted homemade bone broth for whatever reason, I’d probably just use a good storebought broth (I like Better Than Bouillon organic chicken broth), though the downside is that then I wouldn’t have schmaltz for the second part of the recipe. As for the matzo balls, they were fluffy and perfect. Absolutely perfect! I wouldn’t change a thing. For serving the soup, I’d throw in celery along with the carrots next time, and it would obviously be prettier with some herbs. In a smaller bowl and with better lighting. But it is delicious.
For the chicken broth (the yield is about 3.5 quarts)
3 ½ to 4 ½ lbs. chicken necks, backs and wings
3 celery ribs, cut into big chunks
3 carrots, scrubbed and cut into big chunks
2 parsnips, scrubbed and cut into big chunks
2 onions, unpeeled and quartered
1 head garlic, cut horizontally in half
1 Turkish or ½ California bay leaf
1 Tbsp. black peppercorns
1 Tbsp. kosher salt (or more, to taste)
4 quarts cold water (I only used 2 ½ quarts; see note above)
Bring all ingredients to a boil in an 8- to 10-quart heavy pot. Skim froth. Reduce heat and gently simmer, uncovered, for 3 hours.
Pour stock through a fine-mesh sieve into a large bowl and discard solids. If using stock right away, skim off and reserve any fat (you can use it in the matzo balls). If not, cool stock completely, uncovered, before skimming and reserving fat, then chill, covered. Stock can be chilled 3 days in the refrigerator or frozen 1 month (I froze my leftovers).
For the matzo balls
½ cup matzo meal
2 eggs, lightly beaten
2 Tbsp. reserved chicken fat (or vegetable oil, but I used the chicken fat)
1 tsp. salt
¼ tsp. black pepper
2 Tbsp. seltzer (for a lighter texture; I used mineral water) or chicken broth
For the soup
2 to 3 quarts prepared chicken broth (recipe above)
1 carrot, thinly sliced (I would also add celery)
a few sprigs of dill (optional)
Mix all matzo ball ingredients in a bowl. Cover and place in the refrigerator for 30 minutes.
Bring 1 ½ quarts of well-salted water to a brisk boil in a medium sized pot. Reduce the flame. Run your hands under water so they are thoroughly wet. Form matzo balls by dropping spoonfuls of matzo ball batter approximately 1-inch in diameter into the palm of your wet hands and rolling them loosely into balls. Drop them into the simmering salt water one at a time. Cover the pot and cook them for 30 to 40 minutes.
About ten minutes before the matzo balls are ready, bring prepared chicken stock to a simmer with the sliced carrot in it. Ladle some soup and a couple matzo balls into each bowl and top with a couple snips of dill. Eat immediately. 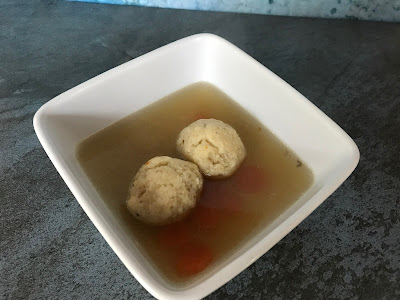