Not long ago, the Little Prince (4 years old) was reading some of his books to the Fox (then 7 months old) – do take a moment to picture the adorable scene. He was reading him his series of books about food (see here), and when he got to Let’s Nosh, he said to him, out of the blue, “Matzo ball soup is my favorite.” I say this is out of the blue because, as far as I know, HE’D NEVER HAD MATZO BALL SOUP IN HIS LIFE. So I decided to call his bluff and make matzo ball soup. Turns out, he absolutely loved it. I mean, we’re all familiar with the phenomenon wherein a child sees a dish and proclaims he doesn’t like it, without even tasting it, right? This was the opposite. On the rare occasion that this happens, take advantage!

So here’s my matzo ball soup recipe, which is little more than following instructions on packages, really. I mean, the way it’s written at the link (on Black Table) is fabulous and well worth the read, but reproducing any of that on here would be plagiarism. That being said, because the Little Prince decided that the only vegetables he likes are “cucumbers, and the ones in matzo ball soup” and because he ate everything in his bowl and had seconds and thirds, I figured I’d share! Of course, if you happen to have homemade chicken stock on hand, use that instead of storebought, and yes you can make your own matzo balls from scratch, but if you want an easy recipe, this is the one. The yield is enough for anywhere between 6 people and a small army.

In a medium bowl, stir the eggs well with a fork. Add the oil and stir again. Add the matzo meal from the boxes of matzo ball soup mix and stir well. Refrigerate for 30 minutes.

Meanwhile, chop the vegetables (in whatever size and shape pieces you want in the soup; this isn’t brain surgery).

In the largest pot you own, bring the water to a boil and stir in the packets of soup mix. Add the chopped vegetables.

Take the matzo ball mixture out of the fridge and, using heaping-teaspoon-sized amounts of dough (I think I used around a tablespoon), roll into balls (which will expand in the soup, don’t worry). Once all the balls are in the soup pot, cover and turn the heat down to low. Cook for 30 minutes and serve. 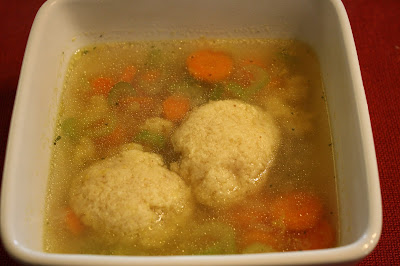