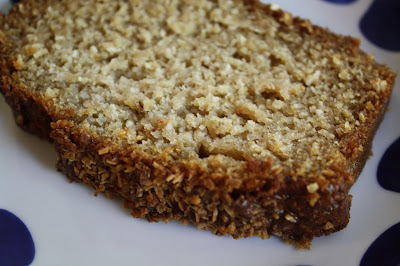 I found this recipe in Bon Appétit, though it’s originally from Bam Bam Bakery in Portland, Maine. I made some substitutions, because I don’t want to clutter my pantry further by buying more specialty ingredients. I once had sorghum flour, but I used it up, so after some googling, I used oat flour instead (which I made by pulsing rolled oats in the food processor). I replaced some of the oil with applesauce, which I wrote down below. I only had fine macaroon coconut, so I omitted the step of toasting it in the oven, for fear of burning it. That’s also what I used on top, although the recipe probably meant what I refer to as coconut chips (the illustration and the photo online seem to confirm this). This also meant that the top of my bread may have darkened prematurely, so maybe I’d bake it closer to 60 minutes next time instead of the 70 minutes for which I baked it. That being said, the crumb was moist and had a great texture. I know I said I’d stop saying this, but you really couldn’t tell this was gluten-free!

Place a rack in middle of oven; preheat to 350 °F. Line a 9x5" loaf pan with parchment, leaving overhang on long sides; coat with nonstick spray.

Toast shredded coconut on a rimmed baking sheet, tossing occasionally, until lightly browned, 5–7 minutes. Let cool. (I omitted this step, because my shredded coconut was too fine, in my opinion, to withstand browning. I could have done it in a pan to keep a closer eye on it, I suppose, but this tasted fine to me.)

Using an electric mixer on medium speed, beat sugar, coconut milk, oil, and coconut extract, if using, in a large bowl until sugar is dissolved and mixture is smooth, about 4 minutes. Add eggs one at a time, beating well after each addition. Beat mixture until very smooth, about 2 minutes. Reduce speed to low; beat in dry ingredients. Increase speed to medium; beat batter 5 minutes. Beat in toasted coconut. Scrape batter into prepared pan; top with coconut flakes.

Bake bread until top springs back when gently pressed and a tester inserted all the way to the bottom comes out with just a few moist crumbs attached, 80–95 minutes (even now, this seems like an obscenely long time to me; I left it in 70 minutes, and would check at the 60-minute mark next time and/or tent the top with foil at that point). Transfer pan to a wire rack and let bread cool in pan at least 10 minutes. Turn out bread onto rack and let cool completely. 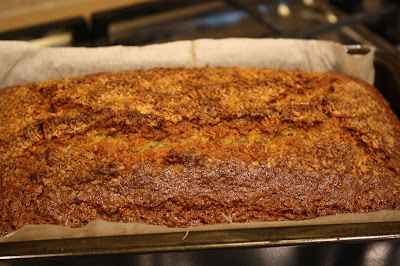 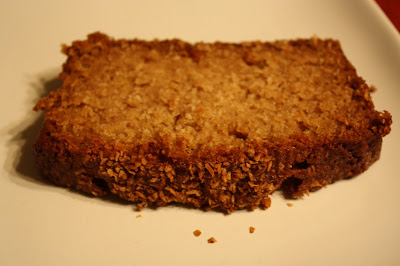