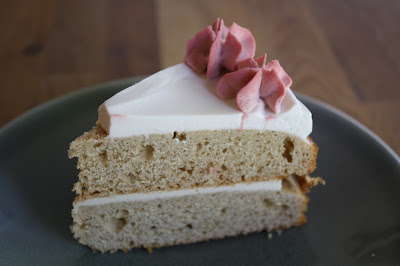 Let me start by saying that this cake is delicious and that I will be making it again. Now that that’s clear, I can also tell you that it’s dairy-free, gluten-free and refined-sugar-free. If I had started by saying what’s not in it, you might have decided that it was free of too many things, but really, this one is great! The recipe is from Gluten-Free Girl, and Shauna James Ahern specifies a few things that I found interesting. First, she says that cakes made with oil are silkier and more tender than those made with butter – I’ve also read this in baking books recently. I don’t know where margarine falls on the spectrum, but in any event, that’s why this cake calls for oil. She also says that “the secret here is to cream the eggs and honey, the way you might cream butter and sugar. When they are fluffy and increased in volume, slowly slowly drizzle in the oil on the side of the bowl. This will keep the volume and make the structure for the cake.” And that’s in part why it keeps its structure even though it’s gluten-free (and technically, grain-free, since buckwheat isn’t a true grain).

Also, and this is very important: you MUST use light buckwheat flour, not the dark one that most recipes call for. I’m not sure I’ve actually seen it in stores, so I bought a bag from Bouchard Family Farms (for those of you who are wondering, it’s allergen-free and kosher parve, unless anything changes in their factory between now and when you buy a bag). This flour was a revelation to me, because it looks so much like all-purpose wheat flour! It also doesn’t have the strong taste I’ve come to expect from buckwheat. Here’s a photo of some in a bowl so you can see. 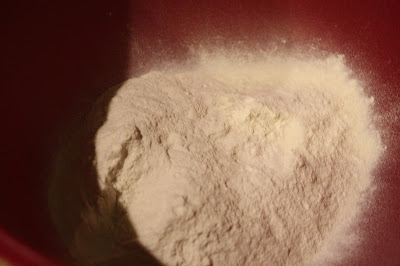 After I frosted the cake, it looked a bit monochromatic. Since I had a little bit of leftover frosting, I decided to color it with some beet powder I had on hand and pipe it on. In retrospect, I think I should have colored the whole batch that way! It was delicious (just be aware that the pink may get discolored over a few days until the cake is eaten).

Preheat oven to 350 °F. Grease two 8-inch cake pans with a neutral oil of your choice (I used a regular 8-inch round pan and an 8-inch springform pan). Set aside.

In a medium bowl, whisk together the light buckwheat flour, the all-purpose flour, the baking powder, the salt, and the spices. Set aside.

In the bowl of the stand mixer, mix the honey and egg yolks on medium until they have become a creamy coherent liquid. Slowly, with the mixer running on low, drizzle in the coconut oil, along the side of the bowl, very slowly. Continue mixing until everything is well combined.

With the mixer running on low, add 1/3 of the dry ingredients, stopping the mixer to scrape down the sides of the bowl as necessary. Pour in ½ of the milk and continue alternating dry ingredients and milk until everything is mixed in. Gently, fold the egg whites into the batter until they are fully incorporated.

Pour the batter into the prepared pans. Bake until the edges of the cake are starting to pull away from the edges of the pan, the top has a definite spring, and a toothpick inserted in the middle comes out clean, about 20 minutes (I found it a bit dry, though, so I would check at the 15-minute mark next time).

Take the cakes out of the oven. Prick holes in the top of the cake and drizzle a little honey over the top (I admit that I skipped this step). Cool in the pans for 15 minutes, then remove from the pans and cool completely.

Open the cans of coconut milk. I like doing this from the bottom, so that I can pour out the coconut water and then scoop out the coconut cream that has risen to the top, which is what you’re after here. (You can freeze the coconut water in an ice cube tray and save it for smoothies, for example.) Put only the coconut cream in the bowl of a stand mixer and mix on medium-high until it thickens a bit, like whipped cream, about 3 minutes. With the mixer running on low, add the vanilla and the honey, then the beet powder, to taste. Mix until thoroughly combined.

For best results, refrigerate the frosting for 1 hour before piping. 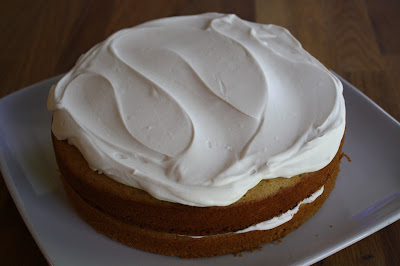 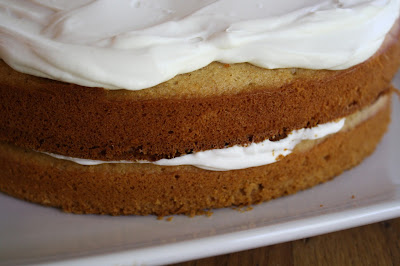 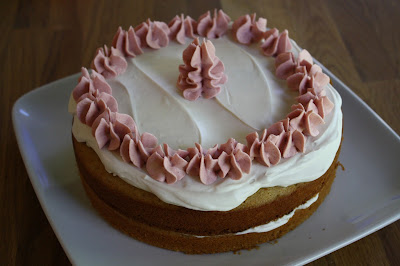 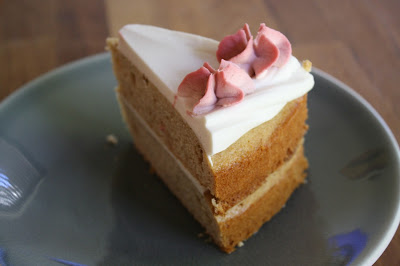 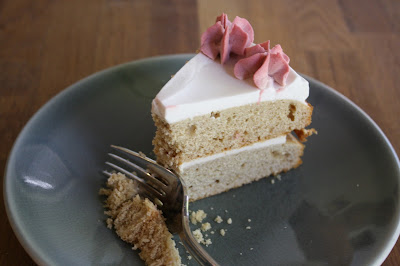