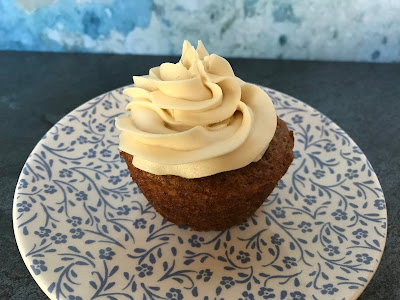 I couldn’t resist making eggnog cupcakes over the holidays, and I paired them with my friend Jen’s recipe for vegan crusting buttercream.
The cupcakes were fine. The center had sunk by the time they came out of the oven, but the icing covered that up. I’m actually not sure if I could have tasted the difference between “eggnog” cupcakes and “holiday spice” cupcakes, to be honest! I’m wondering how eggnog would work in a custard of some sort. Anyway, it was the buttercream that really made this for me – it’s a great recipe!
The link above has a recipe for soy eggnog, and you can find other plant-based eggnogs around the holidays, but if you don’t need this to be vegan, there’s also lactose-free eggnog by Lactaid, for example. I changed the cupcake recipe below a bit by adding salt and reordering the ingredients.
For the vegan eggnog cupcakes
1 ¼ cup all-purpose flour
2 Tbsp. cornstarch
¾ tsp. baking powder
½ tsp. baking soda
¼ tsp. salt
1 tsp. cinnamon
¾ tsp. nutmeg
½ tsp. cloves
1 cup vegan eggnog
1 tsp. apple cider vinegar
¾ cup granulated sugar
1/3 cup vegetable oil
2 tsp. vanilla extract
¼ tsp. almond extract
Preheat the oven to 350 °F. Grease a muffin pan or line it with paper molds (I got 11 cupcakes).
In a medium bowl, whisk together the flour, cornstarch, baking powder, baking soda, salt, and spices. Set aside.
In a small bowl, whisk the apple cider vinegar into the vegan eggnog. Set aside to curdle for 10 minutes.
In a large mixing bowl, mix the sugar, oil, vanilla, and almond extract together until combined. Add the vegan eggnog mixture and combine. Add all dry ingredients. Mix until smooth. Pour batter prepared tins.
Bake for 15-20 minutes, or until an inserted knife comes out clean.
For the vegan crusting buttercream
1 cup (2 sticks) vegan margarine, such as Earth Balance
vanilla, to taste (maybe 1 Tbsp.?) and butter flavoring (optional)
3 ½ cups icing sugar, sifted
½ cup cornstarch
water or non-dairy milk
Mix margarine, vanilla, and butter flavoring (if using) until blended. Mix in icing sugar and cornstarch. Keep mixing until it comes together; do not add liquid until it does, and do not whip it or beat it too strongly. Once it comes together, add in liquid a teaspoon at a time until you get the desired texture (the icing should still be fairly stiff). 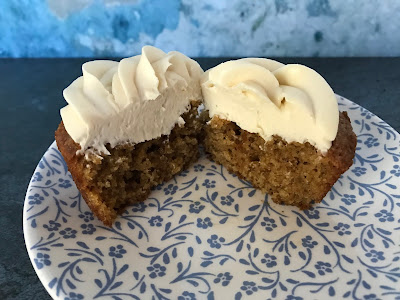