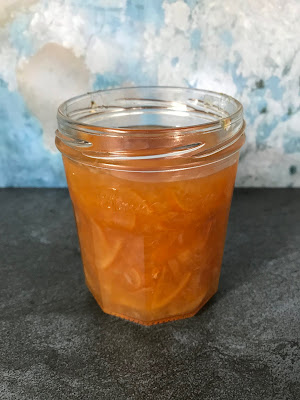 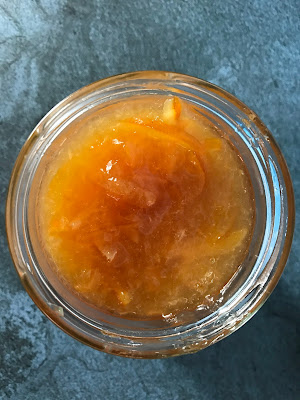 We got nine Meyer lemons from our dwarf tree this year. (Well, there were ten in all, but a squirrel got to one of them. I don’t know why squirrels would eat some of a lemon and leave tomatoes untouched, but there you have it.) I used some for a double-recipe of Meyer lemon pudding cake in a large oval dish, which was delicious. And then I decided to finally tackle Meyer lemon marmalade. I halved the amounts: 4 of my lemons weighed 1 ½ pounds, so I used that along with 1 ½ cups of sugar. It worked really well! The amounts below are the original ones. 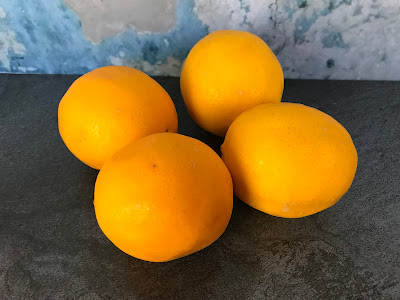 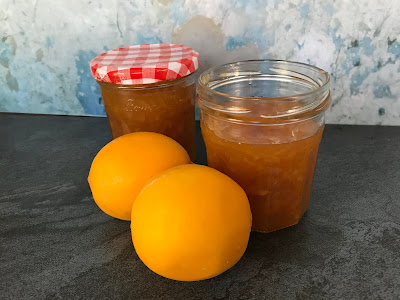 Making marmalade, jams and preserves in general has always intimidated me, because proper canning requires both equipment and know-how that I do not possess. So I decided to put my marmalade in two clean (not sterilized) jars and refrigerate them, making sure to use them up promptly.
Toward the end of cooking, I wasn’t sure how to check that the marmalade had set. I remembered something about cold saucers – turns out I should have stashed several saucers in the freezer ahead of time. I did some quick googling and found this great post, which explains that another way to test it is to make sure it reaches between 217 °F and 221 °F. I may have overshot it slightly, because my thermometer takes a while to show the accurate temperature, but I was still overjoyed with the results! I thought it was absolutely delicious.
I have the Blue Chair Jam Cookbook and I fully intend to use it someday! I think maybe I need to take a class on this, or at the very least watch a video. And get some supplies, which also means storing the supplies. But making this marmalade wasn’t nearly as hard as I thought it would be, so I have renewed enthusiasm for this future version of me that would make preserves!
12 organic Meyer lemons (3 pounds)
3 cups sugar
Rinse the lemons and pat dry. Halve the lemons crosswise and juice them, reserving the juice. Using a spoon, scrape the pulp and seeds from the halves. Using a sharp knife, slice the peels 1/8 inch thick.
In a large, heavy saucepan, cover the strips with 8 cups of cold water and bring to a boil; boil for 1 minute. Drain the strips and rinse under cold running water. Blanch two more times; the final time, drain the strips but do not rinse them.
Return the strips to the saucepan. Add the reserved juice and the sugar. Simmer over moderate heat, stirring to dissolve the sugar, then skimming any foam, until the marmalade sets, about 30 minutes. (See note above.)
Spoon the marmalade into 5 hot ½-pint canning jars, leaving ¼ inch of space at the top, and close with the lids and rings. To process, boil the jars for 15 minutes in water to cover. Let stand at room temperature for 2 days before serving. Refrigerate any open jars. 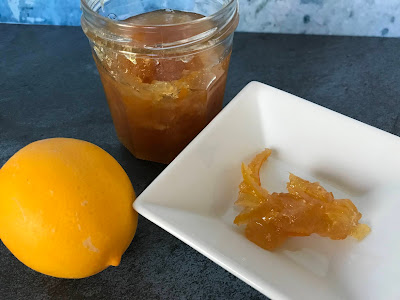 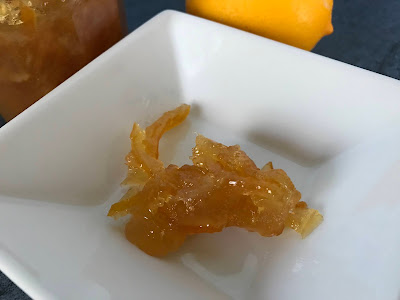 Yay! I find marmalade to be the hardest to make out of all the things I’ve canned, so it can only get easier from here. Highly recommend ATK’s strawberry jam (with the green apple in it). If you have a pot big enough to fit your jars in so they will be completely submerged in water, the only tools you really need are canning tongs and a wide mouth funnel, which are easy to store (I have a collapsible funnel). I have never found the saucer in the freezer trick to work for me, I always go by temperature (I love my thermoworks thermapen!)

YES! As soon as my thermometer breaks, I'm upgrading to a Thermapen. :)

I do not have a pot big enough for the jars, hence my hesitation. I could probably store it in the garage, though. The funnel and canning thongs can surely be stored in the pot. But then there's the jars... It now occurs to me that we have a chest freezer currently sitting empty, maybe I could put the canning stuff in it and then none of it would be in the way?