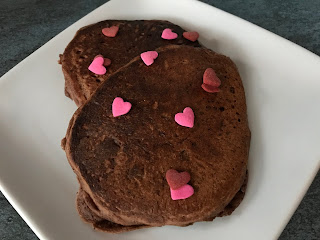 I made a few dishes that were close to pancakes: serabi (which I found delicious with a non-traditional raspberry sauce), then on Candlemas I made buckwheat crepes (which, sadly, I don’t recommend) along with a double batch of my uncle’s crepes for dessert, but decided that it won’t be my go-to crepe recipe after all. (For more about Candlemas and its link to crepes, see here or here; it turns out that Groundhog Day has its origins in Candlemas, though why the Americans left behind the crepes for dinner is beyond me – that’s the best part!) And there’s the pandekager I never wrote about – they’re essentially Danish pancakes with cardamom and lemon zest. Really good! 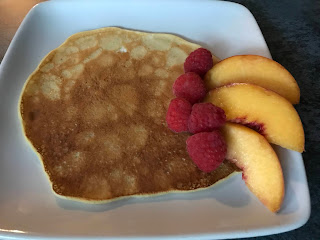 I thought about making chocolate crepes for Valentine’s Day, but decided to try chocolate pancakes from Weelicious instead. These were an easy sell with the kids, obviously, and in hindsight I wish I had served them with some sort of whipped topping and fresh fruit. Because pancakes are not very sweet in and of themselves, I wouldn’t hesitate to throw in some chocolate chips. Good with maple syrup, too, and the heart sprinkles were very seasonal. Of course, now that the Little Prince knows that there is such a thing as chocolate crepes, I’m pretty much obligated to make those too for him at some point in the near future!
1 cup white whole wheat flour
2 Tbsp. unsweetened cocoa powder
2 tsp. baking powder
½ tsp. kosher salt
1 Tbsp. sugar
1 large egg, whisked
1 cup lactose-free milk
1 Tbsp. coconut oil
In a bowl, whisk together the flour, cocoa powder, baking powder, salt and sugar.
In a separate bowl, whisk together the egg, milk and oil.
Stir the dry ingredients into the wet ingredients until just combined.
Heat a large skillet or griddle over medium heat and lightly coat with butter or coconut oil.
Pour about 1 tablespoon of the pancake mixture onto the griddle (I used more, these sound like silver dollar pancakes), making as many pancakes as will fit, cook for 2 minutes or until you see bubbles forming.
Flip the pancakes and cook for one minute longer. 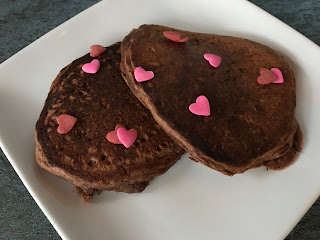