I meant to post more last week, but my heart wasn’t in it. We’ve been hit with some very cold (for Texas) weather and were without water for a few days, so I had other things on my mind. We were lucky to have electricity, and now water is back, albeit with a boil advisory. Hundreds of thousands of people in Texas are not so lucky. The Little Prince’s school might also be closed a while longer, as it seems to have sustained the most damage in the district. But I want to get back to normal, were it only so I feel like I’ve done one thing today, and I figured that the weekend is a good time for a breakfast bun recipe.

The original version of these buns was from Love & Olive Oil. I served them on Christmas morning, and while I loved the flavors, I wasn’t crazy about them. They were very flaky, which was nice, but also unpleasantly sticky. It was the kind of confection for which you butter a muffin tin and dust it with sugar, then bake each bun in a little tin and flip them out of the pan when they are still very warm, or else they will never come out at all (and even then, they unrolled themselves quite a bit and were baked unevenly). I was so afraid of having some sort of dental emergency while eating them that they were clearly not enjoyable! So I decided to adapt them to a non-sticky format. 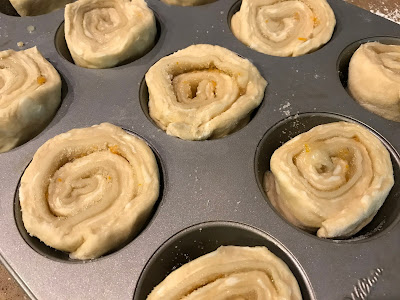 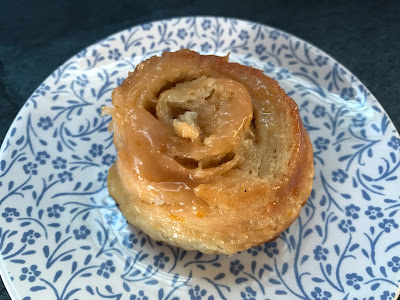 I decided to use the dough recipe from these orange sweet rolls and keep the filling from the original recipe, reducing the sugar. I ended up using powdered sugar instead of granulated sugar, too, more like the chocolate tahini challah buns. I also made them in a pan rather than a muffin tin, which I find easier. And as I did for the first batch, I changed up the spices a bit (the version below is mine). This second batch was a big hit!
The recipe specifically said to stay away from tubes of marzipan sold in grocery stores, because those tend to be rock-hard, and the key here is that you want it to be workable. I bought this one. It is 16 ounces of marzipan, so I had enough to make these buns twice. That being said, I’d consider just using more marzipan next time even if that means rolling it thicker, because I had trouble rolling it out to the proper size – feel free to use more than is called for below.
For the rolls
3 Tbsp. warm water
1 envelope active dry yeast (about 2 ¼ tsp.)
2 Tbsp. sugar, divided
1 egg yolk, lightly beaten, at room temperature
1/3 cup fresh orange juice (zest the orange first and reserve the zest for the filling!)
2 Tbsp. melted coconut oil, cooled
½ tsp. kosher salt
1 2/3 cup cups all-purpose flour, plus more for surface
For the filling
½ cup powdered sugar, sifted
1 Tbsp. finely grated orange zest (from 1 medium orange, see above)
1 pinch of ground cinnamon
1 pinch ground nutmeg
1 pinch of salt
8 oz. high-quality marzipan (see note above) powdered sugar, for rolling marzipan
2 Tbsp. orange blossom water, divided
For the rolls
Pour 3 Tbsp. warm water (105 °F–115 °F) into a small bowl. Add yeast and 1 tablespoon sugar and whisk to combine. Let sit until foamy, about 10 minutes.
Using electric mixer on medium-high speed, beat egg yolk, orange juice, oil, salt, and remaining 1 tablespoon sugar in a large bowl. Add 1 2/3 cups flour and yeast mixture. Beat until dough just comes together. (At this point, I switched to the dough hook and didn’t need to knead by hand.) Turn out dough onto a lightly floured surface. Knead several times with floured hands until smooth, about 5 minutes (dough will be sticky).
Spray a clean large bowl with nonstick spray. Place dough in bowl and turn to coat. Cover with a towel and let sit in a warm place until doubled in size, about 45 minutes.
For the filling
Meanwhile, Line a 9”x13” pan with parchment paper and grease it. Set aside.
Mix together the powdered sugar, orange zest, cinnamon, nutmeg, and salt. Set aside.
On a lightly floured surface, roll the dough to a 9”x18” rectangle, with the long edge closest to you.
Lightly dust a clean surface with powdered sugar. Roll marzipan into a 7”x18” rectangle. (You may need to knead your marzipan into a workable dough if it is on the hard side. You can also use almond paste, just knead in powdered sugar as needed until it forms a workable dough.)
Evenly brush dough with 1 tablespoon of orange blossom water. Lay marzipan on top, lining up the bottom long edge closest to you as well as short sides. There should be a few inches of dough along the top edge; this is important for the buns to seal properly.
Brush marzipan with remaining 1 tablespoon of orange blossom water, then sprinkle evenly with the sugar mixture.
Starting with the long edge closest do you, tightly roll into a tight cylinder; pinch to seal along edge. Using a sharp serrated knife, gently cut cylinder into 12 even discs 1½-inches thick. Gently pull the knife back and forth through the dough, letting the teeth do the work; do not squish or press down too much. Place the rolls in the prepared pan (cut-side up would be prettier).
Set pan in a warm spot (like on top of the preheating oven) to rise until buns are noticeable puffed, about 45 minutes to 1 hour (slightly longer if they had been refrigerated). Preheat the oven to 350 °F.
Bake for 20 minutes or until lightly browned on top. Let cool before serving. (You *could* make a glaze for them with orange blossom water and powdered sugar, but I find them sweet enough as it is.) 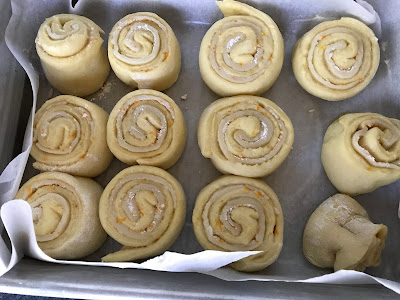 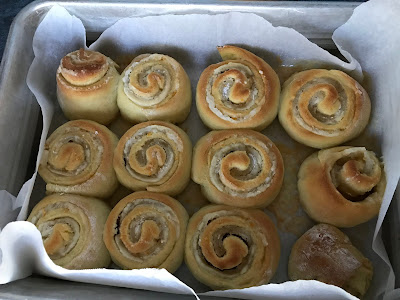 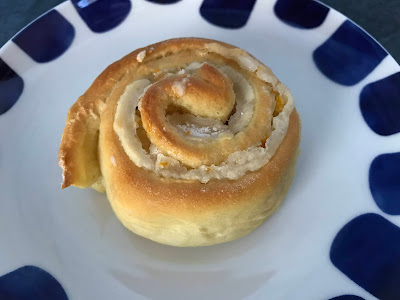 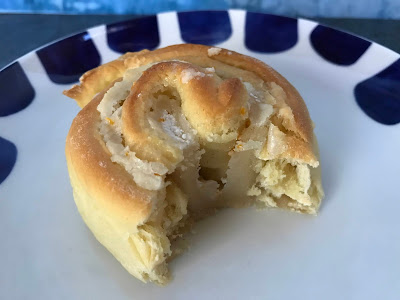 Unknown said...
This comment has been removed by a blog administrator.
5:41 PM