I ended up making two different kinds of buttermilk biscuits recently. First, I tried the ones in Jessica Fechtor’s Stir. They were quick and super easy to make as well as delicious, especially when warm, even though they were a bit homely-looking. I was delighted with them when they were fresh out of the oven, though! I got a total of 14 biscuits, so I froze 6 of them and later pulled them out to make creamed chicken and biscuits; I served the first batch with cream of carrot soup. 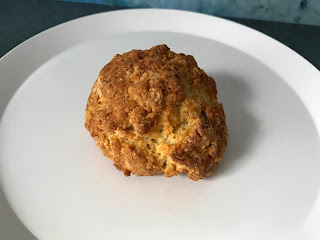 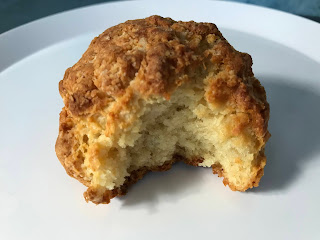 Then I decided to try the (apparently) famous biscuits from the Fox in the Snow bakery (just scroll all the way down for the recipe and a video demonstration with a lot of explanations). I found them via The Kitchn and Instagram. They call for a whole lot of flour and butter and are so flaky that they’re more like the lovechild of a traditional biscuit and a croissant. They are also the tallest biscuits you’ve ever seen, coming in at about 3 inches. Mine fell over while baking, but you know, aim for the moon and you’ll still land among the stars and all that! The original recipe has you brush them with salted honey butter and serve them with jam, which sounds fabulous, but I decided to go the less decadent route and serve them plain.
What I need to make clear about these biscuits is that… they will ruin you for all other biscuit recipes out there. I mean, I was disappointed when I saw that they had fallen over, but OMG, they were *so* good! And they’re actually pretty quick to make, too. There’s nothing to redeem them from a nutritional standpoint, so I can’t justify making them too often, but their memory is haunting me…
5 ½ cups all-purpose flour, plus more for surface
1 ½ tsp. granulated sugar
3 ½ tsp. baking powder
1 Tbsp. plus 1 tsp. kosher salt (I used half as much Morton brand kosher salt)
½ tsp. baking soda
1 ½ cups (3 sticks) lactose-free butter, chilled
2 cups buttermilk (or 2 Tbsp. vinegar topped up with lactose-free milk)
¼ cup lactose-free cream (or coconut milk or, in my case, just lactose-free whole milk)
2 large egg yolks, beaten to blend (I used 1 whole egg)
Preheat oven to 375 °F.
Pulse 2 cups flour, sugar, baking powder, salt, baking soda, and chilled butter in a food processor until largest pieces of butter are the size of a nickel. Transfer to a large bowl with the remaining flour and toss together until butter appears evenly distributed. Add buttermilk over entire mixture all at once and knead mixture until a shaggy dough forms and almost no dry is left at the bottom of the bowl. Turn out onto a lightly floured surface and pat into a thick, roughly 12”-14” rectangle.
Begin by doing a tri-fold: starting from the left, fold the dough halfway to the center, and then fold from the right over top of the first fold. Press down to make sure dough is compact and flatten out again to make a rectangle shape. Rotate dough 90 degrees and fold the dough from the top down. Again, press dough down and reshape into a rectangle. Rotate 90 degrees again, and fold from left to right. Repeat the process 2 more times, ending with a fold from left to right. (I found this description to be confusing – I folded the dough like a letter, and kept folding left-right after I rotated 90 degrees so that it felt more “even”.)
Using a rolling pin, adjust dough to desired thickness, about ¾ of the height of your biscuit cutter (I left mine taller, more like in the video). Dip biscuit cutter into the flour to prevent sticking, and then cut straight up and down, careful not to twist the biscuit cutter (twisting it would prevent the biscuit from rising properly). You should get about 4 biscuits out of your first rectangle (I got 6).
Press remaining dough together and reshape into a small rectangle. Cut out 2 additional biscuits. Repeat as many times as necessary until only a small amount of dough remains. (My biscuit cutter was 3” in diameter, and I made 6 biscuits the first time around and 9 more from the scraps. Were the first 6 more beautiful than the next 9? Yes. But would it have been a sin not to make the next 9 to get as much as I could out of that dough? Also yes.)
Mix egg yolks and heavy cream with a fork until blended. Brush tops of biscuits lightly with mixture and place on a baking sheet. Bake until golden brown, about 30-35 minutes. (You could also freeze some of them for later.) Serve with whatever makes you happy. 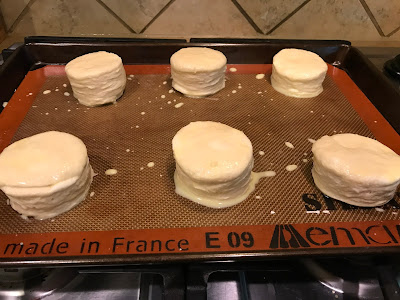 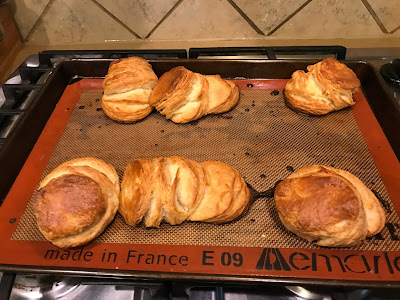 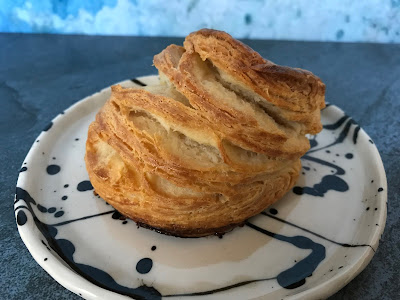 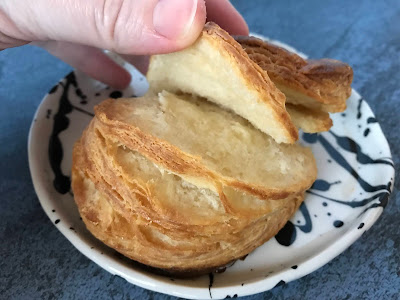 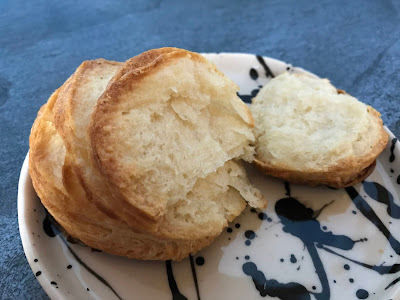