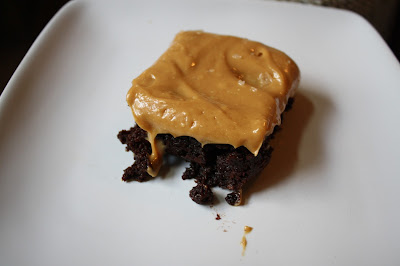 I tried some more brownie recipes lately. There was one for sesame and sea salt brownies which, as it turns out, were good. The crumb wasn’t great, but I’d consider adding tahini and sea salt (but not sesame seeds) to regular brownies that I know are great, just to try that flavor combination properly. I also tried making gluten-free brownies with teff flour, but found them flat and bland. I was thinking of never making them again, but the Engineer *loved* them and had seconds – he thinks they’re delicious.

However, neither of these recipes compare with Ashley Rodriguez’s brownies from Date Night In. They have the chewiness and crackly top that I look for in a good brownie (more like a dense cake than fudge). I think they would be great on their own, as the combination of cocoa powder and unsweetened chocolate give them a really rich, deep flavor which prevents them from being cloyingly sweet. They are not lactose-free, strictly speaking, as they contain browned butter. That being said, I didn’t have any problems digesting it (one serving is 1/9th of the pan for me), and since browned butter adds so much flavor that you just can’t get with a vegan substitute, I highly recommend it. Note that I used margarine for the frosting – yes, because these brownies have peanut butter frosting that is just out of this world! You could use an almond butter such as Barney butter instead, though I confess I don’t know how it would work with nut-free alternatives. You can find a gluten-free version here if you want. In any event, these brownies are fantastic, and I’ll definitely be making them again. If it’s too hot in your kitchen and the frosting starts melting, you can store them in the fridge, but be warned that this makes the brownies denser and fudgier.

Preheat the oven to 325 °F. Grease an 8-inch square pan. Line the pan with parchment paper so that a couple of inches hang over the edge, then grease the parchment.

Place the butter in a medium (ideally light-colored) saucepan and melt over medium-high heat. Allow the butter to cook until the milk solids bubble up and then settle into the pan and caramelize. Swirl the butter in the pan in order to see the color of the little bits on the bottom. As soon as the milk solids are golden and the butter smells nutty, about 3 to 5 minutes, remove the pan from the heat.

Pour the browned butter into a medium bowl and add the chopped chocolate. Let stand for 1 minute to melt, and then whisk together. Whisk in the sugar and vanilla while the butter mixture is still warm. Stir in the eggs, and salt until well blended. Sift in the cocoa powder and flour. Fold the ingredients together until just combined using a spatula.

Pour the batter into the prepared pan and bake for 25 to 30 minutes, or until a toothpick inserted into the middle pulls out clean (in my case, it took a tad longer). Let cool to room temperature.

With an electric mixer, whip together the margarine, peanut butter, and confectioners’ sugar in a large bowl. Continue to mix until everything is well combined and the frosting has lightened in color. Frost the cooled brownies, top with salt, cut into squares and serve. 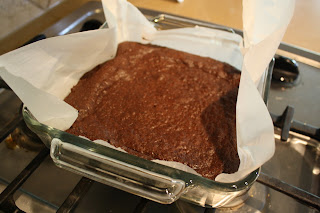 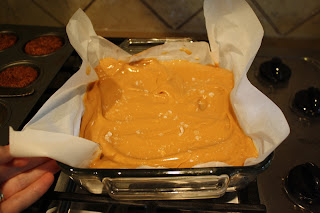 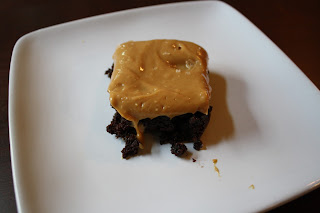 I have to say, out of the nut-butter substitutes, Sunbutter (made from sunflower seeds) is better than any butter made from soy (like Wowbutter). Given the exorbitant cost of Barney Butter (not to mention the availability in my area) I'm going to be sticking with Sunbutter from now on.

Sunbutter is really good! I'm just wondering whether the consistency would work, because it's definitely softer than regular peanut butter.

Let me know if you want me to bring you back some Barney Butter this summer! :)