More banana muffins, because why not?

The Little Prince used to love bananas. There was a time when he would eat them every day. Now, however, his tastes have changed, and even though he still asks for bananas, he’s really not as into them once he does have them. This means that we’ve had a lot of bananas going brown on the counter lately, so I made banana muffins. The world doesn’t need another banana muffin recipe, but I made them anyway, because why not? I used the lesser of two amounts of sugar suggested in the recipe, but I still found the muffins a bit sweet, so I’m suggesting an even smaller amount below. These were really good!

In a small bowl, whisk together the dry ingredients. Set aside.

Using a stand mixer or electric hand mixer, blend the bananas until smooth. Add oil, milk and vanilla, mixing until combined. Slowing add in the dry ingredients while mixing the batter on the lowest speed. Mix until just combined.

Spoon batter evenly into the tins. Bake for 16-20 minutes. Cool in muffin tins. 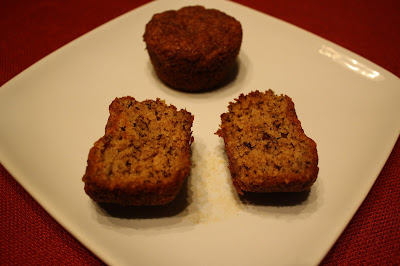 And after that, because I still had bananas left, I tried another recipe: marbled banana chocolate muffins. It was originally a gluten-free recipe, but I don’t have all-purpose gluten-free flour on hand, so I used the same amount (by weight) of wheat flour. They came out a bit dry, so I reduced the baking time below; they were really good, though!

Preheat the oven to 350 °F and prep a muffin tin by greasing the tins or lining them with paper or silicone molds.

Mash the bananas. Put them in a measuring cup and add enough milk to reach the 1-cup mark.

Whisk together the flour, baking powder and salt in a large bowl. Mix in the sugar. Set aside.

Lightly beat the eggs in a medium bowl and add the banana-milk mixture, the oil and the vanilla. Make a well at the center of the dry ingredients and pour the wet ingredients into it. Gently stir together until just incorporated.

Put half of the batter in the prepared muffin tins. Sift the cocoa powder over the remaining half and mix. Put this batter in the tins and, with a fork or a sharp knife, draw figure-eights to mix the batter.

Bake for 17-20 minutes, until the muffins have risen and are golden and firm to the touch. 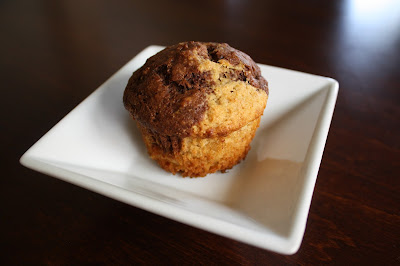 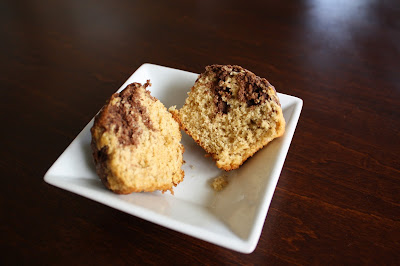