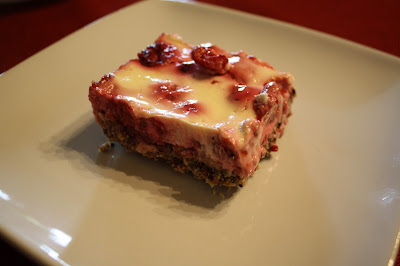 It’s been hit-or-miss lately with the chia seeds. I mean, I know I’ve made some great stuff with them before, but the most recent recipes were duds. Raspberry chia overnight oats were bland, as was chocolate-almond chia pudding. The latter was my first time putting chia seeds in the blender, which did make them closer to a pudding consistency, but even then it wasn’t ideal. Moreover, the Engineer has decided he doesn’t like chia seeds in puddings. So I tried a recipe where they are used differently: dry, in a multigrain crust for raspberry yogurt bars. The recipe is from a calendar published by 100% Canadian Milk, but I can’t find it on their website.

I recommend lining the pan with parchment paper and leaving some overhang, to make unmolding easier – I had greased my pan, even though the recipe didn’t call for it, and I’m glad I did, but I would have liked a little extra help. I omitted the sliced almonds from the topping, because I didn’t have any, and used homemade almond meal for the crust. I also didn’t have a 9”-square baking dish, so I used my 8”-square dish and it came out fine. This was actually a very good dessert, healthful and not too sweet. I think it would be good with blueberries or blackberries as well, and maybe I would add a touch of honey next time.

Preheat oven to 375 °F. Grease an 8”-square or a 9”-square dish and line it with parchment paper so that there is a bit of overhang.

In the food processor, finely mince dates and half the almonds. Add rolled oats, quinoa, flax seeds, chia seeds, and flour and mince some more. Add margarine and blend to obtain a homogenous mixture.

Press mixture into the prepared pan and cover with raspberries.

In a bowl, beat the egg with the vanilla yogurt. Pour over raspberries and sprinkle with remaining almonds.

Bake 30 minutes (I baked mine for closer to 40 minutes, and it was still a bit wiggly in the center). Remove from oven and cool at room temperature before refrigerating. Serve cold. 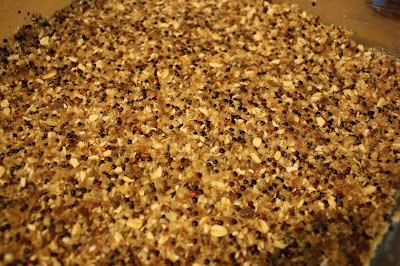 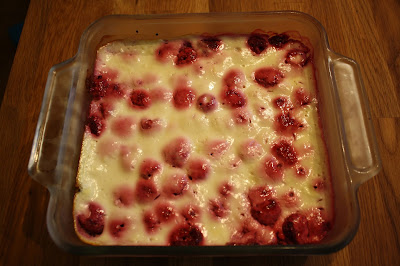 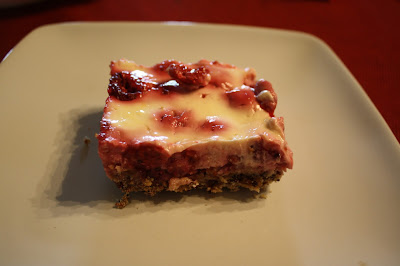 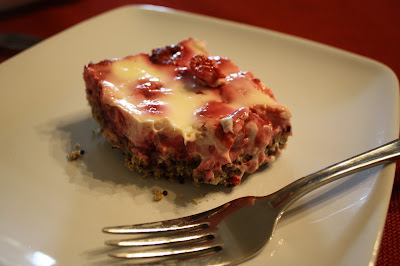