I have seen several recipes for vegan quiches, but this was the only one that used chickpea flour. As it turns out, it isn’t a quiche in the sense that you wouldn’t know the difference between that version and a real quiche, because you absolutely would, but it has the form of a quiche, pushes the same buttons, and fills the same place in a meal. It’s a recipe from Chocolate & Zucchini, where it’s really just a quiche filling recipe – I added half an onion and half a large shallot that were languishing in my fridge, pan-frying them first with 2 cloves of minced garlic, as well as some spinach (roughly 10 oz. frozen, thawed, squeezed and chopped). I think this would go well with red onion or leeks, or maybe cooked mushrooms. I used my regular pâte brisée recipe for the crust, but store-bought or gluten-free is fine, too.

The original recipe said that one could make the filling ahead of time and simply whisk it back into shape before using it, but that was not my experience. My filling never got luscious again and remained the sad ghost of what it had originally been. That being said, the quiche was delicious! The Little Prince wasn’t into it, admittedly, but both the Engineer and I really enjoyed it very much.

Preheat the oven to 350 °F. Prick your quiche shell with a fork and parbake it for 10 minutes on the lowest rack. Set aside.

In a medium bowl, combine the chickpea flour, nutritional yeast, salt, nutmeg, and turmeric. Add the mustard and whisk in 1 cup fresh water.

Cook over low heat for 5 to 8 minutes, stirring constantly, until thickened.

The filling is now ready to use; just combine it with the other filling ingredients and pour into the parbaked quiche shell. Bake at 350 °F for 25 minutes, then brush the top with olive oil and return to the oven for another 5 minutes (this gives a nice sheen to the otherwise matte finish). Serve hot or warm. 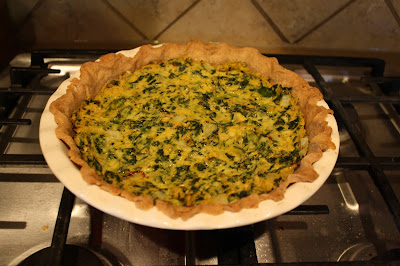 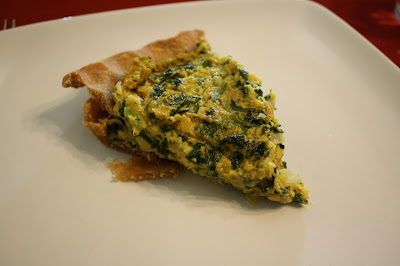