I forgot to tell you about Quinn Popcorn in my last product reviews! I don’t know how much you’ve read about microwavable popcorn lately, but some of the headlines are scary, like ”Microwave popcorn ingredient linked to Alzheimer’s” (specifically diacetyl, used to create the butter smell and flavoring), not to mention the possible carcinogens in the bag coating. Some people respond by popping their own kernels (in a glassware container or, usually, in a plain brown paper bag) or by buying pre-popped popcorn. For the latter, I tasted Skinny Pop’s original flavor last summer, and I have to say it was really good! The salt and pepper flavor looks good, and there’s even a dark chocolate flavor now. That being said, there’s just something about freshly popped, warm popcorn that’s hard to beat. 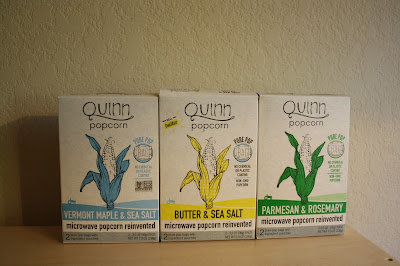 Enter Quinn Popcorn, which comes in both ready-to-pop and already-popped forms (I ordered online, but have since seen their products in stores). I only bought the microwavable bags (see here for how their products differ from most). The flavorings are mixed in right after popping. We tried three flavors: butter and sea salt; maple and sea salt; and parmesan and rosemary. The only downside: we followed their instructions and stuck close to the microwave, stopping it when the delay between popping kernels was about 2 seconds. But even then, it was WAY overdone! We find that just under 1 min 30 sec does the trick, and the unpopped kernels are an acceptable loss to prevent the rest from burning. Once you figure that out, the flavors are really great! Granted, it might be less expensive to buy kernels in bulk and sprinkle them with canola oil, maple sugar and sea salt once they’ve popped, but some of us just want a bag of popcorn when the mood strikes, like if we unexpectedly have time to watch a movie one weekend evening. And for that, I heartily recommend Quinn popcorn!


In other news, I finally tried Mast Brothers chocolate. It is pricey, so in order to try more flavors, I went with the smallest, 28-gram bars (there’s a photo with my thumb and index for scale). The larger sizes are proportionately a better value, but that would have blown my budget. 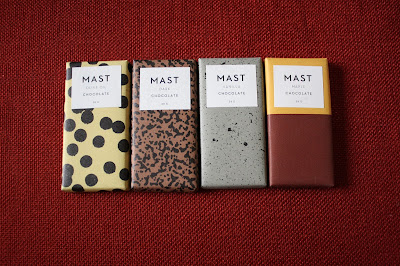 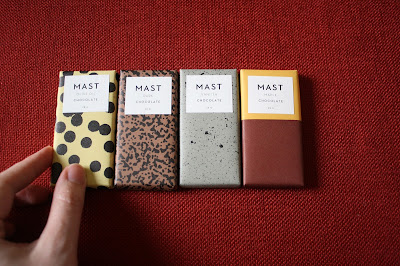 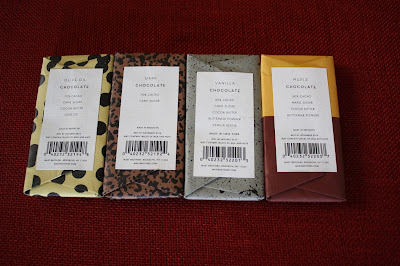 So, in my opinion, the dark chocolate is lovely! It has just the right amount of bitterness and a smooth mouthfeel. It actually reminds me a bit of Alter Eco and Madécasse. The olive oil chocolate was disappointing, because I couldn’t actually taste the olive oil. It tasted very much like the dark chocolate, which is good, but that’s not the point of flavoring it. My experience with the other flavors was similar: I couldn’t taste the vanilla in the vanilla chocolate, but I could taste the milk and I didn’t like it. As for the maple flavor, I couldn’t taste the maple either! It was a bit milkier than the dark chocolate, though not as much as the vanilla one. Overall, I was disappointed by these, especially given the price point! That’s why I won’t be buying them again, even though the flavors in the herb collection sound good in theory – I think it would all just taste the same. So I’m now one of those snobs who think Mast Brothers is overrated.