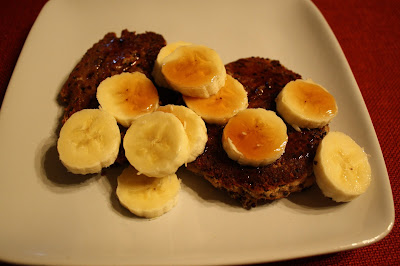 I made this recipe a while back because I had some black quinoa in my pantry (you can use any color, obviously, but black or red stands out more here). Perhaps I should call them pancakes, but they are a bit different. I have to admit that at first, these really frustrated me. The batter was almost as stiff as dough and they were a nightmare to spread in the pan (despite the instructions that said to use a spatula to spread the batter). I had to add more oil to the pan after each batch and I lowered the heat twice. I got a total of 10 hot cakes, and the last 2 were finally nice. And they were really good! So I’m sure if I had gotten the hang of it sooner, I would have liked them even more. I’d throw in a handful of mini chocolate chips next time.

in a small saucepan over medium heat, drop a ½ Tbsp. of the coconut oil. Once it’s fragrant, add the pinch of cinnamon. Stir that around until it smells way good. Add the rinsed and drained quinoa and a pinch of salt. Stir it around in the oil a bit to toast. Add the water to the pan. Bring the quinoa to a boil, then simmer for about 15 minutes. Drain off excess liquid and cool quinoa completely. (I did this the night before and put the quinoa in the fridge overnight.)

Add the lemon juice to the milk and set aside for 5 minutes to curdle.

In a blender, combine the almond meal, vanilla extract, remaining coconut oil and curdled milk. Flip it to high and blend until the mixture is very smooth, about a minute. Scrape this mixture into the bowl with the spelt flour mixture. Gently fold it all together with a spatula until just combined. Add the cooled quinoa (and mini chocolate chips, if using) and fold it in until it’s evenly mixed.

Heat a large sauté pan or griddle over medium (I ended up lowering the heat later on). Brush with melted coconut oil (or vegetable oil such as safflower or grapeseed oil). Drop 1/4-1/3 cup of batter onto the pan. Spread the batter out a bit with a spatula or the bottom of the measuring cup (this was really hard to do and had me frustrated – maybe I’ll just make smaller pancakes next time). Once bubbles start to form on top and the bottom is golden, flip them over. Continue to cook until bottom side is golden/dry. Repeat with remaining batter, keeping cooked hot cakes warm as you go along and adding oil to the pan as needed. 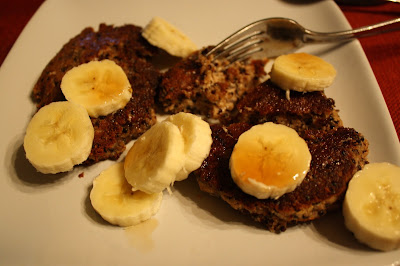