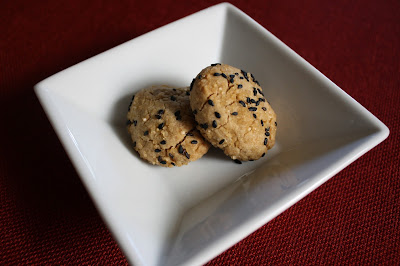 I’ve had sesame cookies on the brain lately. I decided to try a recipe I’d had for a long time, and when I asked the Engineer to buy ½ cup of sesame seeds, he brought back 2 cups and basically said that the price was really good. So I decided to cue up all the sesame cookie recipes I’d been meaning to try. But things didn’t turn out too well.

I used to work in a flower store, and the building owner’s wife would sometimes bring homemade cookies on holidays. My favorite were her sesame cookies. She eventually agreed to share the recipe, which I dutifully wrote down on a series of pink Post-Its. And then put away for 10 years. But then when I dug it up and made it… those were not her cookies. I followed her instructions to the letter, but there was hardly anything in common between what came out of my oven and what she used to make. I’m pretty sure she left out something important just to keep her family recipe safe. All I have to say about that is, she’d better hope she never needs me to give her directions anywhere. (Also, if anyone has a recipe for a Greek or Eastern European cookie, crisp and golden yellow, shaped like little miniature braided challah and, I think, brushed with egg wash before being sprinkled with sesame seeds, please send it my way.)

I followed that up with sesame coins from Alice Medrich’s Pure Dessert. They were actually quite good, but a little thinner than what I wanted. (To be fair, I still wanted the first cookies I had tried to make.) 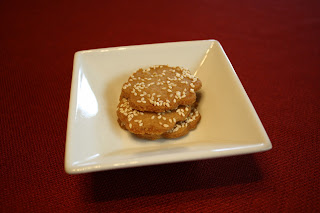 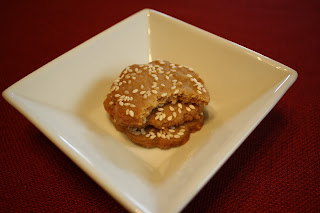 Then I tried seeded buckwheat cookies, but those also came out looking nothing like the photo. When the Engineer saw the baking sheet, he asked what they were, and I showed him the original picture and said, “Well, I can tell you what they’re not. They’re not these!” So I’m not touching that recipe again. To use up more sesame seeds, I made no-bake sesame, coconut and ginger cookies, both the baked and unbaked versions, but they weren’t my thing and a lot of them ended up in the trash. To use up more sesame seeds, I also tried a sesame chicken celery root salad, which was good except for the fact that it didn’t keep too well in the fridge (I found that the celery root got pasty and unpleasant).

The only sesame cookie that I think is worth discussing here is this tahini cookie from Bon Appétit. In my case, I felt that the dough remained too crumbly and the cookies were a bit too dry for me, even though I only baked them 18 minutes. Next time, I would use tahini that’s a bit more liquid (more “natural almond butter at room temperature” than “natural almond butter in the fridge,” if that helps) or I’d add some moisture. Maybe an egg yolk? In any case, these were good and I’d make them again. I got 16 cookies. (And I didn’t even use the sesame seeds that the Engineer bought for these, because he bought white seeds, but these cookies look better studded with black seeds. I still have ½ cup of white seeds to use up!)

Preheat oven to 350 °F. Pulse flour, pine nuts, powdered sugar, tahini, butter, and salt in a food processor until dough forms a ball around blade. (See note above, about moisture level in the dough.)

Form dough into 1” balls and roll in sesame seed mixture. Place on a parchment-lined or silpat-lined rimmed baking sheet, spacing 2” apart, and flatten slightly. Bake cookies until lightly golden, 20–25 minutes (I only baked mine 18 minutes). 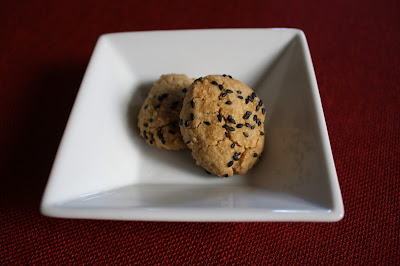 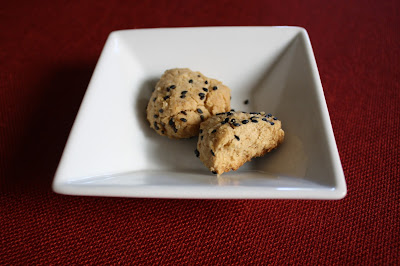