OK, so I’ve made more recipes from Jenny Rosenstrach’s Dinner: A Love Story cookbook. I ended up not talking about them because they were good, but not great. There was whole wheat spaghetti with caramelized onions, spinach and parmesan; turkey chili (some of which is still in the freezer); and now, this buttermilk oven-fried chicken with rainbow salad. 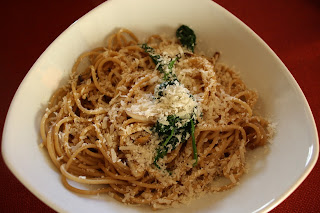 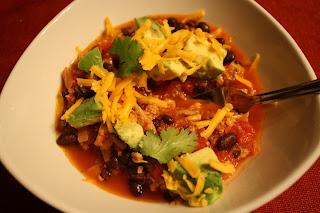 It’s very similar to the breaded chicken cutlets I’d made before, but this time, the chicken is marinated in buttermilk first. (The original recipe called for drumsticks, but I used skinless boneless chicken breasts that I cut into smaller pieces.) What I really liked was the side, because we’re always reminded that we should eat “all the colors of the rainbow”, and wham! They’re all on the plate at the same time here. The Little Prince liked the chicken, but he only tasted the salad the third time I served it, although even that was a bit of a miracle. (Also, as I was preparing the salad, he asked for, ate and DID NOT SPIT OUT bell pepper for the first time.) I really liked it and will keep this meal in rotation!

In a bowl, whisk together the buttermilk, mustard, and garlic. Add to a large zipper-lock plastic bag with the chicken pieces. Refrigerate for at least 30 minutes and up to 12 hours.

Preheat the oven to 400 °F. Line a large shallow baking sheet with foil and coat lightly with cooking spray.

In a large bowl, combine the corn flake crumbs, herbs, cayenne and salt and pepper.

Pull the chicken pieces out of the marinade, letting the excess drip off. Dredge each drumstick in the bread crumbs until well coated and then place on baking sheet. Spray the pieces lightly with cooking oil. Bake until golden and cooked through, 35 to 40 minutes (30 minutes in my case, with the split breasts).

For the rainbow salad
Chop a red bell pepper and an orange bell pepper, slice some red cabbage, add frozen corn and peas (or edamame, in my case). Heat everything in a small saucepan with water or in a frying pan for about 5 minutes; at the end, add a pat of vegan margarine and some salt (optional). Note that after a few days, the cabbage will dye the other vegetables a blueish shade. 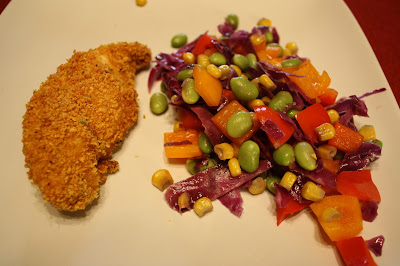