I’ve been reading through Joanne Chang’s Baking With Less Sugar. The title is pretty self-explanatory; it’s about baking with less refined white sugar and embracing other sweeteners, such as honey or maple syrup. As it happens, you can often trick your brain into thinking that you’re eating something sweet by adding extra cinnamon or vanilla, because we associate those with sweet desserts! The first recipe I tried is the vanilla honey rice pudding. It turns out that it’s not very different from my usual rice pudding, which uses 1/3 cup sugar (compared with ½ cup honey here); this version also has a bit more fat, but nothing worrisome. Interestingly, though, this felt sweet enough that I didn’t want to add maple syrup to it, despite the fact that that’s how I ate rice pudding when I was growing up. Even though each step took me a little longer than it should have (especially waiting for the mixture to thicken over heat), I really liked the result. I might actually cook it a bit less next time, to have it less stiff. The Engineer liked it so much that he declared it surely flows from every faucet in heaven!

Place the milk and cinnamon stick in a medium saucepan. Using a small paring knife, scrape the seeds from the split vanilla bean into the milk; throw in the pod as well. Bring the milk to a boil over medium-high heat. Stir in the rice with a wooden spoon and decrease the heat to a low simmer. Cook the rice slowly in milk for 20-25 minutes, uncovered, or until the rice is soft. Stir regularly during cooking with the wooden spoon to keep the rice from sticking to the bottom.

Remove from the heat, remove the cinnamon stick and vanilla bean pod, and stir in the raisins. In a medium bowl, whisk together the egg yolks and honey; slowly ladle the hot milk-rice mixture into the yolks, whisking all the while. Continue adding hot milk-rice mixture to the yolks until about half of it is mixed in. Dump the rice mixture back into the saucepan and cook over medium heat, stirring constantly with a wooden spoon, for 2-3 minutes, or until the mixture thickens. Remove from the heat and stir in the ground cinnamon and salt. 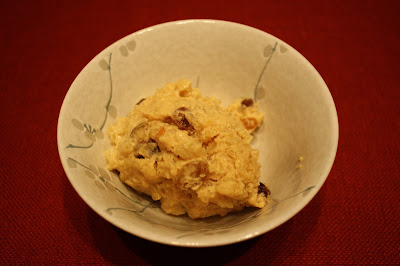