What can I say, I liked vegan chocolate tarts. These are made with coconut oil in both the crust and filling. The filling didn’t come out nearly as smooth as for my chocolate cashew tarts, even though the original post showed them as being perfectly smooth, but they were very good nonetheless. I think it’s because I’m using a new kind of cocoa, and based on what I can tell after making a batch of my usual chocolate sauce, it does seem to absorb more liquid than other brands (but it tastes fantastic!).

For the crust
Place the almond flour, cacao powder, and salt into a large bowl and whisk to combine. Add the maple syrup and coconut oil and blend together with a fork until everything comes together and mixture becomes wet.

Press the dough evenly into cupcake pans with liners (I got 9 out of this and recommend silicone liners). Spread the dough with fingers along the bottom and up the sides. Refrigerate for 1 to 2 hours to allow the dough to firm up and chill.

For the filling
Put the coconut oil and maple syrup in the bowl of a food processor and process until well combined. Add the cacao powder and process until smooth, stopping to scrape down the edges of the bowl as needed. Pour the chocolate mixture over the crusts and spread evenly. 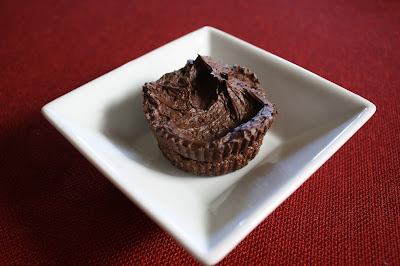 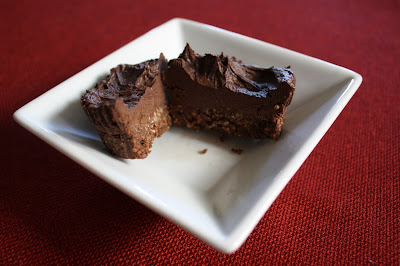