This year, I made a pumpkin pie before Thanksgiving. We were going to be hosting the Engineer’s mother over the Thanksgiving holiday, and I really didn’t know how she felt about pumpkin pie this year, but I didn’t want to take a chance (she once said she disliked pumpkin and squash and had refused to taste pumpkin pie the first time we celebrated Thanksgiving here; then again, she said the same thing about sweet potatoes at the time, but a year ago she said she ate sweet potatoes practically every day, so who knows). But I, for one, really wanted a pumpkin pie this fall, and it seems like all the ones I remember were rather ho-hum, non-descript pumpkin purée pies. I therefore decided to make a pumpkin chiffon pie recipe that I had seen on The Kitchn, but which is actually adapted from Saveur magazine. I had been hanging on to the recipe because it calls for cream, but I decided to use coconut milk instead, and it worked out just fine. So this recipe is dairy-free, though it isn’t vegan – or even vegetarian, come to think of it, because I used animal gelatin. The author of the original post says that the problem with this recipe is that it will ruin you for other pumpkin pies. And I have to confirm: yes, it’s true. Don’t eat this if you foresee a lot of plain pumpkin purée pies in your future: this is a different beast, sure, but anything else will pale in comparison. It is scrumptious (can I use that word with a straight face to mean beyond delicious?). The filling is both dense and fluffy, all the tastes are perfectly balanced, it holds together well, the crust is not just an afterthought… It is basically the perfect pumpkin pie. Come to think of it, maybe I should have made my mother-in-law taste it after all, because this one might have changed her mind. Or at least, if not, nothing will.

Note that the recipe below makes one large pie if you are using a deep pie dish like the one pictured; if you use the shallow tin plates in which most commercial pies are baked, you’ll get two pies out of it.

In a large bowl, combine the cookie crumbs, butter, sugar and salt (I did this in the food processor, since that’s what I used to make crumbs out of the cookies in the first place). Press mixture firmly into 2 tin 9-inch pie pans or 1 deep 9-inch ceramic pie plate.

Bake for 10 minutes, and cool on a wire rack.

For the filling
In a small bowl, sprinkle the unflavored gelatin over ¼ cup Cointreau to soften for 5 minutes. Set the mixture over a bowl of hot water and stir until the gelatin is dissolved.

In a heavy saucepan, whisk together the pumpkin purée, coconut milk, ½ cup of sugar, 3 egg yolks, cinnamon, ground ginger, nutmeg, allspice, and salt and cook the mixture over moderately low heat, stirring constantly with a wooden spoon for 10 minutes. Transfer the mixture to a bowl, stir in the gelatin mixture, and let the mixture cool.

In a large bowl, beat 4 egg whites until they hold soft peaks. Beat in the remaining 1/3 cup sugar, 2 tablespoons at a time, beating the meringue until it holds stiff peaks, and fold this meringue into the partially cooled pumpkin mixture.

Pour the filling into the baked shells and chill the pie, lightly covered, for at least 6 hours. Garnish with fresh whipped cream (there is lactose-free cream in Canada; otherwise, use any vegan substitute, or omit it if you forget your whipped topping in the freezer like I did). 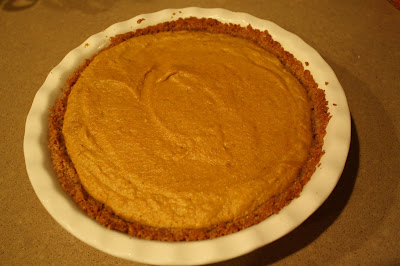 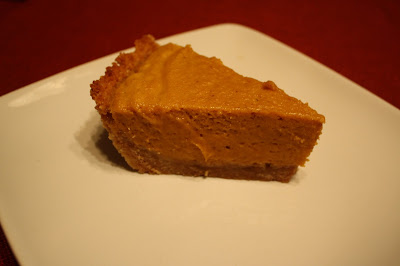 [Update, November 2018: I made this pie for Thanksgiving this year, and my mother-in-law DID like it!]
Posted by Amélie at 3:22 PM

Not sure if you stated this and I missed it, but Nilla Wafers are not dairy free, just FYI.

That's true, but it's in such small amount that any lactose in there is unlikely to affect anyone. It's not dairy per se that's the problem for me, it's lactose.