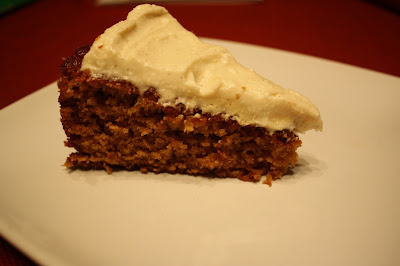 Bon Appétit published a piece about Milktooth, a brunch restaurant in Indianapolis. In it was this recipe for spiced honey cake with cream cheese frosting. The original recipe is gluten-free, but because I don’t have all-purpose gluten-free flour ready to go and didn’t feel like fiddling in my pantry, I made it with wheat flour. It somehow feels wrong to me to adapt a gluten-free recipe to make it gluten-full, but, well, that’s just what I did. The lactose-free substitutions, though, are made without guilt! I really liked this cake, perhaps because the honey flavor came through more than in most honey cakes I’ve tasted. Sure, there are spices, but overall, the batter isn’t very dark, so the spices didn’t overpower the honey. I had a bit of a problem for the frosting, though: adding the required amount of cream from a can of coconut milk made for a frosting that was way too liquid. Next time, I would add only a few heaping tablespoons, for flavor, but I would make sure to monitor the consistency of the frosting as I go (as it was, I had to strain it over cheesecloth before using it). It was delicious, however!

I say it again every once in a while, for new readers: Green Valley Organics makes lactose-free cream cheese that is certified humane, and that’s what I used in this recipe. I didn’t have any of the recommended decorations for the cake, and it was just for us to eat at home, so I omitted them entirely.

For the cake
Preheat oven to 350 °F. Coat a 9" cake pan with nonstick spray and line bottom with a parchment paper round (this needs to be a pretty tall pan, so I used a springform pan).

Combine granulated sugar, brown sugar, oil, honey, egg, and egg yolk in another large bowl. Scrape in seeds from vanilla bean; discard pod. Using an electric mixer on medium speed, beat mixture until pale and thickened, about 4 minutes. Reduce speed to medium-low and gradually pour in orange juice and buttermilk. Beat until frothy, about 2 minutes. Reduce speed to low and gradually add dry ingredients; beat just until smooth and homogenous (it will be thin, like pancake batter).

Pour into prepared pan and bake until cake is golden brown and center springs back when gently pressed (a cake tester will not come out clean), 45–55 minutes. Transfer to a wire rack and let cool in pan, 20 minutes. Run a knife around edges of cake to loosen and invert onto rack; let cool completely.

For the frosting and assembly
Using an electric mixer on medium-high speed, beat cream cheese and butter in a medium bowl until smooth. Add powdered sugar, lemon zest, and salt and scrape in seeds from vanilla bean; discard pod. Beat on low speed until mixture is very light and thickened, about 2 minutes; scrape down sides of bowl. With motor running, add coconut cream by the tablespoonful and beat until very soft peaks form (save coconut milk for another use). Make sure to monitor the consistency and only use as much of the coconut cream as you need.

Pile frosting on top of cake and spread to edges (it’s okay if it cascades over the sides). Decorate with bee pollen, fennel fronds, flowers, and berries, if desired. 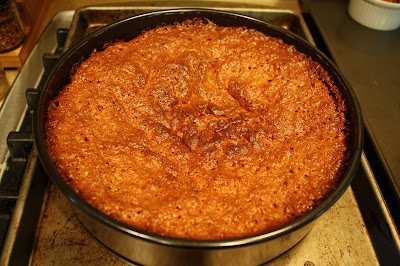 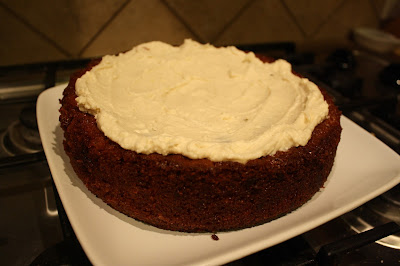 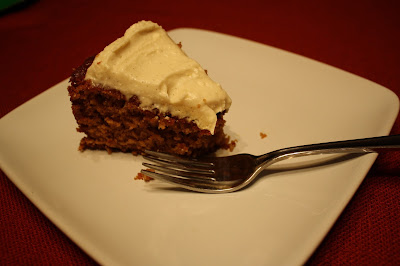