I know this sounds like the title of a Big Bang Theory episode and doesn’t augur well for the recipe, but bear with me. Each fall, I make recipes with squash. I try not to make them too often, because I know that squash is unpredictably hit or miss with the Engineer and I don’t want to make him sick of it. So maybe a dish every other week or so? But this year, he declared a squash moratorium. It came on the heels of a squash risotto (in which I had omitted the sage to avoid a repeat of the pumpkin ravioli fiasco, and really, it would have been fine had the squash been roasted instead of pan-cooked). Before that, I had made a vegan spaghetti squash lasagna bake where we both agreed that the tofu mixture meant to replace ricotta was very good, but the rest wasn’t. So that stopped my experiments with squash this year. However, I had already planned spaghetti squash latkes before the moratorium was imposed, I had the squash sitting on my kitchen counter, and I was making them to eat for lunch with the Little Prince, so the Engineer wouldn’t have to suffer them for dinner. I went ahead and made those despite the moratorium, and I’m glad I did.

I’m no expert on Hanukkah, but I believe that technically, the important thing about a latke isn’t the potato, but the oil. Latkes made with other vegetables are therefore acceptable, if not as traditional. The advantage of using spaghetti squash here is that you already have strands of vegetables, so there’s no need to grate anything. And really, these latkes are awesome! I’d never made any with cheese before, but it worked really well. I hope you try them!

Preheat oven to 400 °F. Cut the squash in half lengthwise and scoop out the seeds. Lightly drizzle the flesh with olive oil and season with salt and pepper. Roast in the oven, cut-side up for about 40 minutes or until tender.

Allow the squash to cool slightly, then use a fork to shred the squash into strands. Transfer your squash "noodles" to a strainer to drain any excess liquid. (I strongly recommend wringing them in a clean dish towel like you would with potatoes. You probably need to be gentler with cooked squash than with raw potatoes, but my mixture ended up too soggy with only a strainer and I used extra flour to compensate, but ended up with latkes of the pancake persuasion when I prefer something with no “batter”.)

In a large bowl, combine the sliced green onions, chopped parsley, chopped sage leaves, and minced garlic. Once the spaghetti strands have drained of excess liquid, add them to the bowl with the herbs and toss to coat. Fold in the egg, Pecorino Romano, chickpea flour, salt, and pepper. Toss all of the ingredients together until the mixture is well combined.

Using a soup spoon, scoop a generous amount of the squash mixture into your hands and form into patties, one by one, and lightly flatten. Make sure you shape all of your patties before heating the oil. Heat a few tablespoons of oil in a large pan. Once the oil is hot (you can test by adding a strand of squash — if it sizzles, you're ready to go), add the patties, making sure not to overcrowd the pan. Depending on the pan size, you should be able to fry about 4 to 5 latkes at a time. Fry for about 2 minutes, or until golden brown and crispy. Flip the latkes and fry for another 2 minutes on the other side. Transfer the cooked latkes onto a paper towel-lined plate. Repeat with the rest of the mixture and additional peanut oil.

Serve the latkes hot, with lactose-free sour cream if desired. 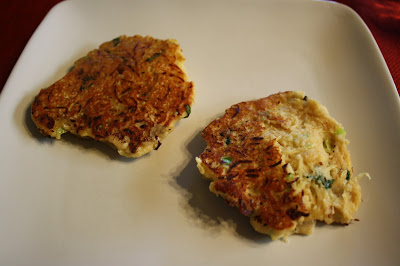