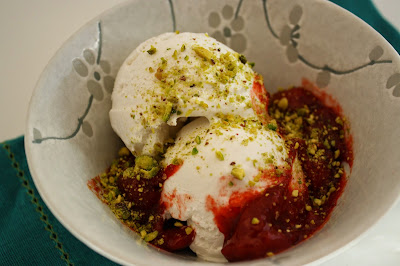 I’ve had more bad luck with desserts since the chocolate hazelnut cake. I tried a vanilla chia seed pudding that was inoffensive at best – it would have been better as a vehicle to show off fruit or sauce rather than a stand-alone dessert. I made one last recipe from 100 recettes pour toi mon cœur (which I talked about here, among other places). Or at least, it’s probably the last, because even though I’ve still got one bookmarked, the nine I made so far were less than stellar. After reading this article (in French), I’m coming away with the impression that my initial assessment was correct and that some of the chefs simply made these up on the fly, were forced to make substitutions and didn’t bother testing all of them. The dessert I had tried this time was blueberry and pistachio crêpes with ramekins of chocolate pudding: the crêpes were a complete flop if made as instructed (with the topping added in the pan), the chocolate pudding was lackluster, and the servings were just too big. None of it was make-again-good. 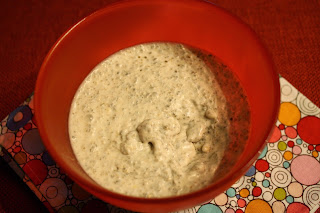 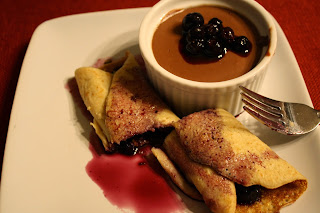 Then, I bought a half-flat of strawberries at the Poteet Strawberry Festival. I started by making a low-sugar strawberry pie with oats in the crust and apple juice concentrate as a sweetener. I had been looking forward to that recipe for a long time, and I knew I needed fresh strawberries in season to make it, so this was the perfect occasion. Unfortunately, that pie was a complete failure. The dough was hell to work with and not even very good (despite the oats), and the filling never gelled like it should have. This used up half my strawberries, and I froze the rest. 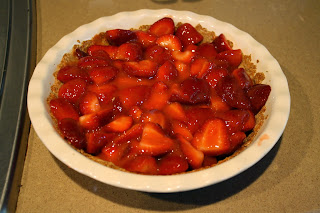 But then, then, there was this strawberry sauce. I didn’t want to use up all my remaining strawberries, so I only used 2 cups. Since they were actually pretty tart, I left all other quantities the same, including sugar. It was the Best. Thing. Ever. (The word I wrote down for it at the time was “fanta-bulous.”) It tasted like spring, and the sorbet was almost an afterthought in that dish. I did, however, run out of strawberry sauce long before I ran out of sorbet, so I can attest to the fact that this sorbet is actually great on its own, even after a few weeks in the freezer – it gets hard, but not rock-hard; I don’t even have to let it thaw before I can scoop it out. It’s also fantastic with chocolate sauce. As for the pistachios, they look great, but I preferred to omit them in later servings. The recipe is from Sara Forte’s new cookbook, but I found it via Not Without Salt.

In a medium pot, warm 2 cups of the coconut milk, the sugar, brown rice syrup, and a pinch of salt. Simmer, stirring occasionally over medium heat until the sugar is dissolved.

In a large bowl, add the remaining cup of coconut milk and stir in the vanilla and cornstarch to dissolve. Slowly stir the warm coconut milk into the coconut-cornstarch mixture. Set the bowl in the fridge to cool completely. Once cooled, churn the mixture in your ice cream maker according to the manufacturer’s instructions. Leave the mixture to set fully in the freezer. (At this point, it had an awesome soft-serve consistency.)

For the sauce, in a heavy saucepan over medium low heat, combine the strawberries, rhubarb, a pinch of salt, and the sugar. Leave everything to very gently simmer for about 20 minutes. Give it a stir and barely simmer again, stirring occasionally, for 10 minutes longer. You will have chunks of fruit between a loose liquid; this will set more as it cools to become a thicker sauce. Add the ginger (if using) and allow the mixture to cool, uncovered, to room temperature. The sauce can be kept, covered, in the fridge for 1 week.

Serve the sundaes with a puddle of the sauce, a few scoops of sorbet, another drizzle of sauce, and pistachios on top. 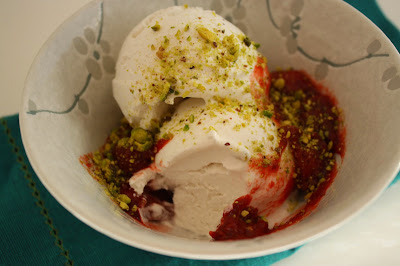