I finally got around to trying the shepherd’s pie that I had meant to make last fall. (I had accidently made the one from America’s Test Kitchen when I actually meant to make the one from Cook’s Country). It took a while because I made a detour via The Kind Life for a vegan version of a shepherd’s pie with a crust. (And I would have made the one from Minimalist Baker, too, if it weren’t for the fact that the men of the house are tired of lentils – I’ll save it for next winter.) The vegan crusted version didn’t work, though, because the filling was way too liquid (even after I thickened it with cornstarch AND strained it); it might have worked without a crust, but as it was, I expected a pie that holds together more. The leftovers were more solid, but I still don’t think I’d make it again. 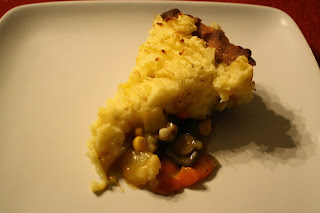 The Cook’s Country version, though, is fantastic. It’s really everything you could want from a shepherd’s pie, to the point where I’ll have trouble going back to blander pâté chinois! Neither the Engineer nor I drink beer, so the beer for this recipe was chosen strictly based on its label, but I must say it worked well. The recipe calls for spreading beaten egg on the topping, to ensure its firmness. Personally, I’d say that’s a bit overrated and I probably wouldn’t bother with it next time, so I’m marking it as optional. I also used soy creamer instead of cream, but if I had access to lactose-free cream, I’d probably go for that. I’ll be sure to make this again – come to think of it, it would be a good dish to make when I have people over for dinner. 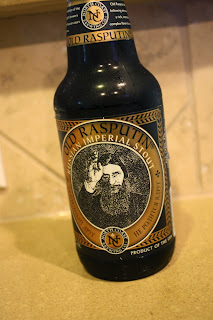 For the filling
Heat butter in large skillet over medium-high heat until foaming. Add onion and carrots and cook until soft, about 8 minutes. Add meat, ½ teaspoon salt, and ½ teaspoon pepper and cook, breaking up meat into small pieces with wooden spoon, until browned, about 12 minutes. Add flour and tomato paste and cook until paste begins to darken, about 1 minute.

Add creamer and cook until it spatters, about 1 minute. Add broth, beer, soy sauce, and thyme and simmer over medium heat, stirring frequently, until mixture is thick but still saucy, 15 to 20 minutes. (The mixture can be prepared ahead up to this point and refrigerated until needed.) Remove from heat, stir in peas, adjust seasonings, and transfer to broiler-safe 2-quart casserole dish.

For the topping
Adjust oven rack to upper-middle position and heat oven to 375 °F. Bring potatoes, ½ teaspoon salt, and water to cover to boil in large saucepan over high heat. Reduce heat to medium-low and simmer until tender, 15 to 20 minutes. Drain potatoes, return to saucepan, and mash potatoes with butter and creamer until smooth. Season with salt and pepper.

Spread potatoes over filling, using spatula to smooth top and sealing it against the edges. (This helps prevent liquid from bubbling up and overflowing, though personally I feel like this isn’t usually a problem. Then again, I always set the pan on a baking sheet before putting it in the oven.) Brush with egg, if using, and drag fork across top to make ridges. Bake until filling is bubbling, about 15 minutes. Turn on broiler and cook until top is golden brown, 3 to 5 minutes. Remove from oven and cool 10 minutes. Serve. 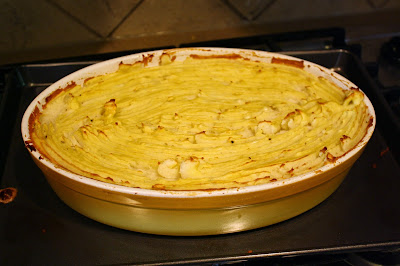 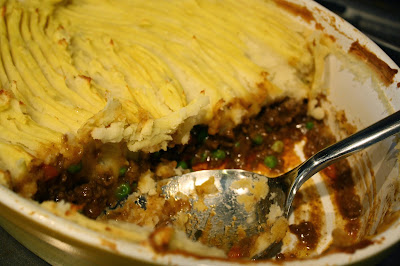 We always use soy creamer and never use the egg. The only beer we buy is for cooking as well!