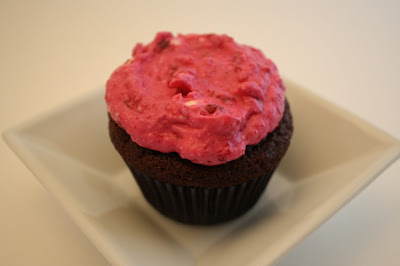 I recently tried a recipe for vegan raspberry tiramisu cupcakes, mostly because I was curious about frosting made with coconut oil. The results were less than enjoyable, though: even with the air conditioning, my coconut oil wasn’t completely solid, which was probably a contributing factor in making the frosting too soft. The other factor is that I didn’t use all the sugar, but I stopped adding it after half a pound when I realized that this was over-the-top sweet already. The frosting was very liquid, so I ended up storing the cupcakes in the fridge, but then the frosting was too hard. In the end, it didn’t matter much, because the cupcake itself completely fell apart even before I added the raspberry filling (and I had even omitted the soaking liquid, so this recipe just wasn’t meant to be). There was no way I would have been able to core them, anyway, so I just spooned the raspberry filling in the conspicuous divot on top of each of the 14 cupcakes and put frosting on top of half of those (and then I ran out). And to conclude, nope, I did not enjoy those cupcakes. I’m all for trying this type of frosting again, albeit from a different recipe, but I’ll wait until the weather is cooler. 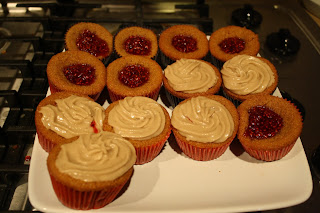 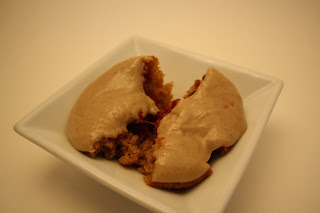 However, because I now have lactose-free cream cheese, I also tried the chocolate velvet beet cupcake recipe from Weelicious, and I really, really liked them. The cake itself is very good, though at this point I’m not sure how novel it is. The most noticeable thing is frosting, which is bright pink and colored naturally with beet purée! The only downside is that if your beet purée isn’t perfectly smooth, little chunks of beets get left in the frosting. I don’t know how much smoother I could have made this purée, though, so I’m actually wondering whether some grocery stores sell it in the canned or frozen section, so that I could get a more uniform texture (the same way we buy canned pumpkin purée, for example). I also got impatient and didn’t let the cream cheese and margarine come to room temperature, hence the little white chunks in the frosting. I take full responsibility for that, though, and I’d start my cupcake-making earlier in the day next time. Apart from the beautiful, beautiful color, I do like the fact that this frosting isn’t too sweet. For the record, there is a slight beet taste in these, but the chocolate hides a lot of it, and it’s not off-putting in the least (the Little Prince agrees).

My method for roasting beets is to wrap them in foil and bake them in at 425 °F for about 1 hour. I then peel them and purée them in a food processor.

Preheat oven to 350 °F. Line a muffin tin with paper liners (the original recipe said the yield was 14 cupcakes, but I got 16 – too bad it’s not an even dozen).

In a separate bowl, whisk together the rest of the ingredients.

Slowly add the dry ingredients to the wet, stirring to combine thoroughly as you go.

Pour about 1/3 cup batter into each of the prepared muffin cups and bake for 25 minutes or until a toothpick comes out clean.

Once the cupcakes have cooled, make the frosting. Place all the ingredients in the bowl of a stand mixer and beat on medium to high speed until fluffy. Spread on the cupcakes. 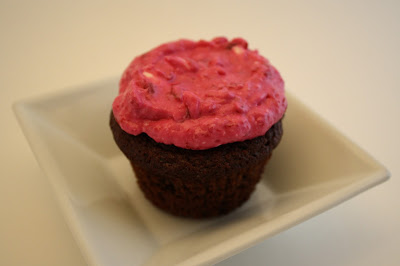 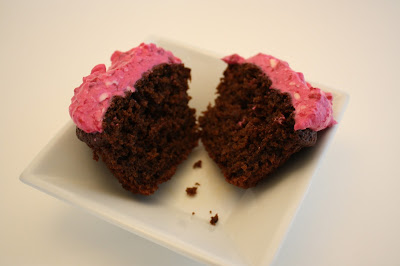