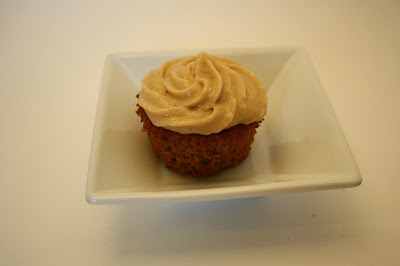 I made these cupcakes to use up some pumpkin purée I had left in the freezer. I liked them, but I have to admit that my first impression was an overload of cinnamon. I’d definitely use less next time, because it was competing with the pumpkin and maple flavors, so I changed the amounts below. That being said, I kept the cupcakes in the fridge, and they really got tastier over time, as the flavors had a chance to meld. I also love that I had a vegan frosting, though I admit I wish there had been less sugar in it. The original recipe was for 18 cupcakes, and I got 16.

In a large bowl, cream together butter and sugars until light and fluffy. Beat in eggs, one at a time, followed by pumpkin purée and vanilla extract. Stir in half of the flour mixture, followed by the buttermilk. Stir in remaining flour mixture and mix just until no streaks of dry ingredients remain.

Divide batter evenly into 18 muffin cups, filling each about ¾ full (if you only have a 12 cup muffin pan, reserve the leftover batter and refill the pan once it has cooled to bake the remaining 6 cupcakes).
Bake for 18-20 minutes, or until a toothpick inserted into the center of the cake comes out clean. Turn out onto a wire rack to cool completely.

In a large bowl, beat margarine to soften. Blend in maple syrup, cinnamon, salt, and vanilla. Gradually blend in the confectioner’s sugar until frosting has a thick, spreadable consistency. (In my case, I used a scant 2 ½ cups of sugar and no milk at all; it was still a bit soft for my liking, so I would have needed more sugar, but this was so sweet already!) Spread or pipe onto cooled cupcakes. 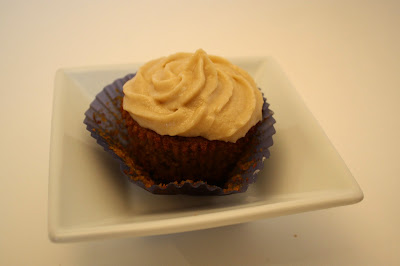 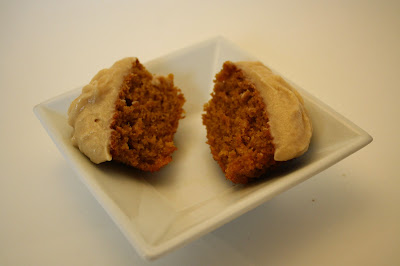