This is one of those dishes that is greater than the sum of its parts. I was all the more surprised since I wasn’t actually expecting anything great. I made this for a few lunches one week, but I usually put more effort into dinner. But dinners had disappointed me (putting ginger in tomato-butter sauce is good, not great, and it turns out I’m not crazy about chicken khao soi). And Momofuku’s ginger-scallion noodles with tofu were good, but less than photogenic. 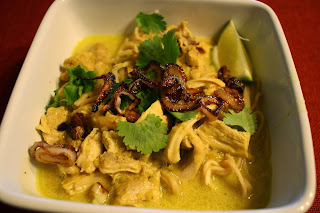 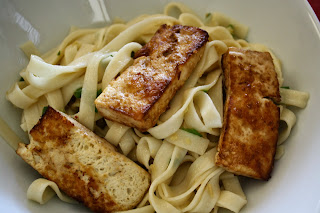 So now I thought I was just slapping a few things together for lunch, changing ingredients according to what I had on hand, and this salad blew me away. It was creamy and so satisfying! Even the dressing is made with avocado, it keeps really well for a few days (though I liked this dish better at room temperature than cold). The Little Prince even liked it once he decided to taste it (though that was only on one of the three days I served it).

For the salad
1 ½ cups raw einkorn (I used ¾ cup barley because that’s all I had; avoid “light” grains like quinoa)
¾ cup pepitas
1 cup sunflower sprouts or radish sprouts (I omitted them, but they would have been nice)
¾ cup chopped cilantro
¼ cup chopped flat-leaf parsley
2 ripe medium mangos, peeled and cut into ½-inch dice
½ tsp. kosher salt
1 avocado, diced (optional)

For the dressing
In the bowl of a food processor, combine the avocado, olive oil, lemon juice, vinegar, salt and a few grinds of pepper. Process until smooth. Add the yogurt at the end and process until combined. Taste and season with additional salt and pepper if desired.

For the salad
In a medium saucepan over medium-high heat, bring 3 cups of water to a boil. Then add 1 ½ cups einkorn and reduce heat to low. Simmer on low for 30-35 minutes, or until the grains have absorbed the water. Set aside to cool.

Meanwhile, preheat the oven to 350 °F and toast the pepitas until fragrant, about 5-7 minutes. Set aside to cool. (I prefer to do this in a dry pan.)

In a large salad bowl, combine the cooked and cooled grains, ½ cup of toasted pepitas, ¾ cups sprouts, cilantro, parsley, mango and salt. Fold in the avocado dressing and stir to combine. Top with remaining ¼ cup toasted pepitas and sprouts, as well as additional avocado if you'd like. Serve immediately. Store leftovers in an airtight container for up to 3 days. (I cut the avocado only before serving the salad, but the avocado dressing was fine mixed in and refrigerated for 3 days.) 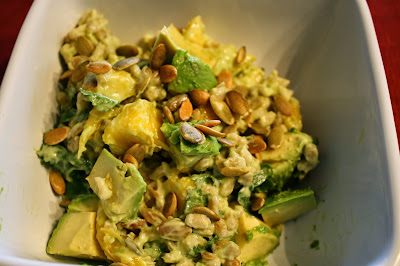