As a follow-up to the pumpkin Bundt cake, I continued my annual fall festivities with pumpkin doughnut muffins. I had the exact same recipe bookmarked twice, once on Brown-Eyed Baker and once on Martha Stewart (which, it turns out, was where the recipe originally came from). My main complaint about this recipe, besides the order of the steps that I’ve rearranged below, is that I had just under ¾ cup of cinnamon sugar left at the end. I understand that there will always be some left over, because I need something in which to dip them, but this was such a big amount that it really feels like a waste. I’m currently using some of it to top hot cereal in the morning, but I’m writing half the original amount below, and that’s how I’d make it from now on. That aside, the muffins themselves were really good, and since I made them with white whole wheat flour, they had some pretty healthful aspects (not including the fact that they’re covered in sugar, of course). I like these for breakfast, but they make great snacks, too!

For the muffins
Preheat oven to 350 °F. Butter and flour 12 standard muffin cups.

Beat the butter and brown sugar on medium speed until light and fluffy, about 3 minutes. Beat in the eggs, one at a time, scraping the sides of the bowl as needed.

With the mixer speed set on low, add the flour mixture in three additions, alternating with two additions of the pumpkin mixture, beating until barely combined. Turn off the mixer and fold the batter a few times with a rubber spatula to catch any pockets of flour that weren't incorporated.

Divide the batter evenly between the muffins cups (about a heaping 1/3 cup batter). Bake until a toothpick inserted in center of a muffin comes out clean, about 30 minutes. Let the muffins cool on a wire rack for 10 minutes.

For the cinnamon-sugar coating
the muffins are resting, combine the sugar and cinnamon in a shallow bowl. Working with one muffin at a time, remove the muffins from the pan, brush all over with the melted butter, then toss to coat in the cinnamon-sugar mixture. Return to the wire rack and let cool completely. 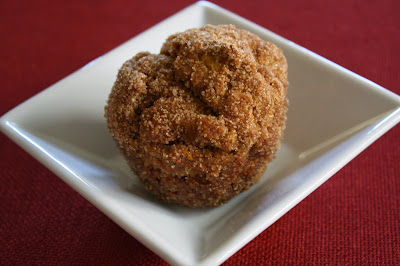 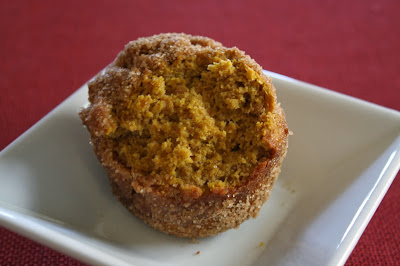 When we were kids we'd sprinkle cinnamon-sugar on our toast! I also like pumpkin in the fall. I pinned a super-good vegan pumpkin muffin recipe that I'm hoping to make again soon.

The pumpkin chocolate chip one? I've bookmarked it and I want to make it soon.